Re-blog: Nurturing the next generation of rail workers

A recent tweet commenting on what appears to be a new generation of young rail enthusiasts got me thinking about skills and how the industry can attract the next generation of railway workers. The skills gap within the rail industry seems to be a subject which comes up frequently and has been in part blamed for the difficulty the industry has had in delivering large infrastructure projects. GWML electrification and the Control Period 5 debacle highlighted the issues the industry has with a lack of skilled workers to undertake the monumental task of upgrading the UK's railway network. The CP5 debacle was in my opinion largely the fault of the Government, they simply asked the industry to do too much in such a short space of time, but it is clear that the rail industry must attract and retain skilled people if it is to continue to modernise.

I do think there may be a deep-rooted issue with encouraging young people to join the railway industry, or for them to even consider a career within the industry, and as it happens I do have some experience with interacting with young rail enthusiasts, as I have a small YouTube gaming channel. It's not something I often discuss openly beyond those who watch my channel and follow me on various social media platforms. But I have gotten to know a number of incredibly talented young railways enthusiasts, who would be a credit to the industry, should they decide to pursue a career within rail.

There is a small group of enthusiasts in particular who are incredibly talented and knowledgeable. They make 3D models of UK rolling stock for a game called Transport Fever 2, on which my own Youtube Channel is based. They are able to recreate these models in exquisite detail, which often include custom sounds and recreations of various iterations of locomotives in a variety of liveries. 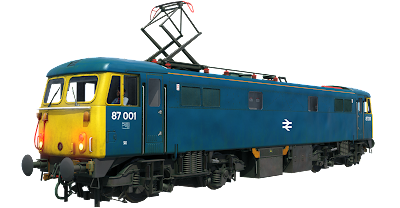 3D model of a Class 87 by a modder called Chris

I think it is these young people who really should be encouraged to take up a career within the railway industry. However, I do not think that the industry knows how to talk to these young individuals, who don't always use established social media platforms such as Twitter and Facebook to communicate. Many are active on an online platform called Discord, which is a chat room-style app that can be used to discuss a variety of subjects.

I know some Rail contributors are familiar with Discord and have their own, "servers" which are used to talk about railway subjects. I also know that this is where a large number of young rail enthusiasts are choosing to congregate online and discuss gaming, modding and railways in general. 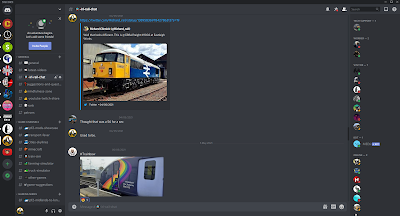 Example of an active Discord server

Now I'm not saying that it's the job of those within the railway industry to monitor these platforms or even to engage with young people on these platforms, but it does show that, what are considering relatively new platforms such as Twitter and Facebook, which the railway industry is now using with great effect to engage with passengers, are fast becoming almost, dare I say it, old-fashioned.

I myself through my YouTube channel have been, in my own small way trying to educate and garner interest from people who are interested in the railways. Throughout my videos I try and be as factual as possible and try and talk about different railway subjects, in fact during the last series that I recorded which was based in the north of the UK, I talk about HS2, discussing why it is needed, where it will serve and what it will do to improve the UK's rail network. Of course, I try to keep my videos light-hearted and entertaining, but I do also like to try and inform and encourage discussion.

Now, I do not pretend to have the answers on how to engage with young people, but I do think it's vital that the industry does engage with these young people. Whilst 3D modelling and coding may not, on the face of it sound like something that is directly transferable into rail. Clearly, not all young rail enthusiasts can become designers or architects working within the rail industry, but as the railways become increasingly digitised, it is these tech-savvy individuals with knowledge about coding who may well have the skills that the industry needs.

Network Rail already offers an IT and Business Services apprenticeship which it says “could involve anything from implementing cutting-edge, innovative technologies and applications like digital railway traffic management and accident prevention to playing a supporting role in the delivery of a significant business change initiative to working in one of our business as usual departments (Information Security, IT Support Services Programme Office)”. But are these opportunities being marketed widely enough to young people? Granted only a small number of such opportunities may be available each year, but are organisations doing enough to promote them to the right sort of young people?

Coding is an increasingly sought-after skill, so the rail industry can't just expect that rail enthusiasts who can code will pursue a career within the railway, so the industry must do all it can to make rail as attractive as possible, and as subsequent generations become increasingly diverse and socially aware the industry must also do all it can to show that it is open to and accepting of diversity.

Put simply, if these young people do have skills that the industry needs, then they must be made aware that the skills they have are transferable into the “real world” and also that they will be welcomed into the rail industry no matter their gender, sexual orientation or where they come from.