"Economy Secretary Ken Skates has today announced the red route as the preferred option for the £250m Deeside corridor scheme." View the full statement at www.gov.wales

After a decade of delay the Welsh Government looks set to finally make a decision on how best to improve a vital link between England and Wales. The A494 - A55 link is one of the busiest border crossings between England and Wales, with the 2 lane A494 at the point where it crosses the River Dee alone carrying almost as many vehicles as the 3 lane M4 Second Severn Crossing [1][2]

The first plans to improve the link were put forward in 2007 by which time houses had already been compulsorily purchased and to this day many remain empty. The original proposal was for a 7 lane highway consisting of 4 southbound lanes (heading toward Wales), 3 northbound lanes (heading towards England) with hard shoulders and connector distributor roads either side. It was also proposed that the speed limit would be increased from 50mph to 70mph.


Existing A494 at the point where it crosses the River Dee 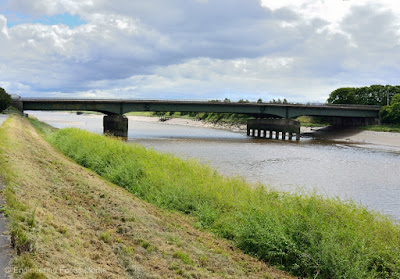 Just as the proposal looked to go ahead and with the majority of the land already in government hands the plans were scrapped after fierce public opposition. It was said the proposal which in places would be 11 lanes wide were excessive and disrupted too many people. It was claimed that 5000 people would be adversely affected.

The decision to cancel the proposal as it stood at the time may have had merit, unfortunately though the Welsh Government were slow to come up with an alternative and in the proceeding 10 years traffic levels have increased and congestion between the A494 and A55 has worsened, especial during holiday periods.

Two proposals have been put forward by the Welsh Government, one known as the Blue option an adaptation of the original proposal to widen the A494 and upgrade junctions including the  A494/A55 interchange.

The other proposal known as the Red option would bypass a large section of the A494 and the A494/A55 interchange. This would be achieved with the construction of a new section of dual carriageway between Flintshire bridge and the A55 close to junction 33 near to Northop. The flat junctions along the A548 which links A494 to Flintshire bridge would also be grade separated. 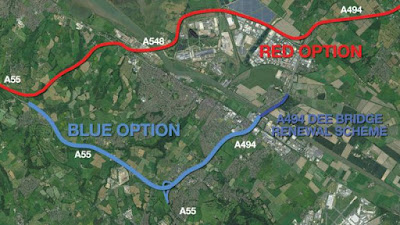 The public consultation for both proposals ended on the 30th of June 2017 with the preferred route expected to be announced this summer. However the Welsh government has already signalled that it prefers the second opinion or what is known as the Red Option. Both options would have a budget of around £200m, however the Red option promises a better benefit to cost ratio and improved journey times.

The A548 Flintshire Bridge 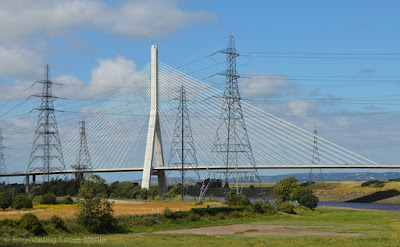 On a more symbolic note, the Red option would see the realisation of a long talked about link from Flintshire bridge which for the last two decades has been known locally as "the bridge to nowhere" to the A55.


The consultation document can still be found here.

Posted by Engineering Focus at 00:11