Chester to Leeds by Rail - A bumpy start.

Travelling from Chester to Leeds by rail isn't anything new, but prior to May 2019 passengers had to change trains at Newton Le Willows, having caught the Chester to Manchester Piccadilly service operated by Transport for Wales Rail, then changing to a TransPennine Express service to Leeds. However, being able to travel directly from Chester to Leeds and vice versa is novel.

The direct Chester to Leeds service operated by Northern has been operating for almost 3 weeks now, having started on the 20th of May this year. The service forms Part of what Northern are calling their 'Northern Connect' services, which are long distance services, operated supposedly by high quality rolling stock, namely refurbished class 158s and the new class 195s, when they finally begin to enter service. 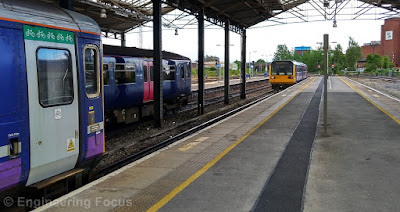 The title of the article suggests that the service may not have got off to the best start, which is certainly true if my journey is anything to go by. I knew before booking the ticket that the service would not be operated by a class 195, they are still undergoing modifications and many of the train crews are yet to receive training in order to operate them. I was mildly disappointed that I'd have to wait to ride a 195, however I was under the impression that my journey would at least be made on a refurbished class 158. Well, you can appreciate my surprise and disappointment when I found out the service would be operated by a class 142 (Pacer). At first I thought it was a terminating Manchester to Chester service via the Mid Cheshire line, which is also operated by Northern. I thought maybe it will move off, or the Chester-Leeds train would pull in behind. But no, a Pacer was to be my ride all the way to Leeds. It wasn't just me who was disappointed, the train crew were not too thrilled either, I overheard a driver remark "they're just so slow". The line speed between Chester and Warrington is 90mph, yet the service is currently pathed at just 75mph, so perhaps Northern already knew when they launched the service that Pacers may have to operate on the route, 75mph being the top speed of a Pacer.

Speaking to the guard he told me he has worked on a mix of 156s, 142s, single car 153s and 158s on the route so far. It would seem then, that the DMU shortage is still a big problem for Northern, despite cascades and the arrival of new trains. It seems Pacers may be in service right up to the January 2020 deadline when they must be withdrawn, as they will no longer meet new standards for persons with reduced mobility.

The service I was on wasn't that busy, but there was a good number of people on the train given the time, just after peak. The guard informed me that the peak services can get very busy and the 153s and Pacers can get crowded. I'm not sure if many of the passengers on the train that I was on continued all the way to Leeds, a number of people got on and off at Warrington Bank Quay and Manchester Victoria. A number of people also got on and off at the station stops along the Calder Valley line, with stops including Sowerby Bridge and Bradford Interchange.


View of the picturesque Calder Valley 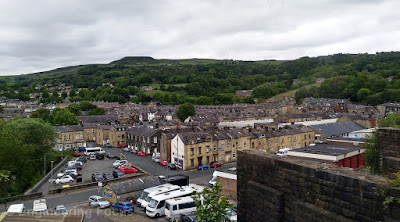 Oddly some services are scheduled to call at Frodsham, others at Helsby. The guard seemed as perplexed as I was, as it was initially intended that the service would operate non stop between Chester and Warrington Bank Quay. There seemed to be no particular reason or logic to the stops at Helsby and Frodsham, as the timetabled stops at those stations were so infrequent that it didn't serve commuter traffic. Helsby and Frodsham did recently benefit from the doubling of services into Chester with the introduction of the Chester/Wrexham service to Liverpool Lime St via Liverpool South Parkway operated by TfW Rail.

I may have been disappointing by having to ride a Pacer for 2 and a half hours, however I certainly couldn't grumble at the price! I paid just £28 for an advanced return travelling off peak, compared with £51 return if had I travelled with TfW Rail and TP Express. There is one slight downside though, and that is the journey time. Currently the journey time from Chester to Leeds is between 2 hours 29 minutes and 2 hours 32 minutes. The service changing at Newton Le Willows on the other-hand takes just 2 hours. There is also now a third option, taking the Chester-Leeds service to Manchester Victoria and changing trains there for a TP Express service to Leeds, which will get you into Leeds 25 minutes faster than had you stayed on the Northern service. The service changing at Manchester Victoria also works out at about £50 return however.


If you're happy to enjoy the views across the Pennines for half an hour longer you can save yourself almost £25. It is important to stress, that in order to get the £26-28 fare you have to book the tickets in advance. I booked mine via Northern's app just an hour before booking my train and paid £28 for a return fare, but there are return tickets available costing just £26. 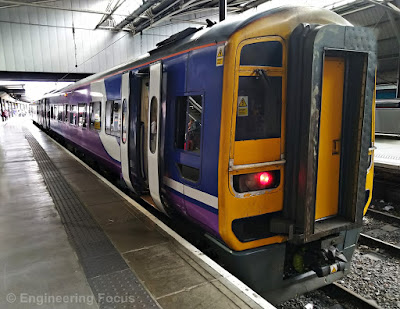 I must also say that the Northern service isn't just cheap to Leeds. Currently Northern's advanced fares are considerably cheaper than TfW Rail's service to Manchester which is currently £18 one way. You can get to Manchester Piccadilly for £13 if you book in advance and go via the Mid Chester line which takes half an hour longer than TfW Rail service. Alternatively, if you don't mind getting off at Victoria rather than Oxford Rd or Piccadilly you can get to Manchester in just over an hour for £8.50 if you book in advance with Northern.

I should add that I'm not certain if these are just introductory fares which are place because it is a new service. So if you're reading this some time after I posted the article then the fares may have changed.

It's not clear if the 2 and a half hour journey is temporary or if it can be improved when they have a sufficient number of new trains and or class 158s, which can be guaranteed to operate the service. The class 158 has a top speed of 90mph whereas the 195s are capable of 100mph. Given that the Northern service, which skips Helsby or Frodsham currently takes roughly the same amount of time as the TfW Rail service which stops at Frodsham, Helsby and Runcorn East, I would think a few minutes could be saved between Chester and Warrington Bank Quay alone by pathing the service as 90mph instead of just 75mph. I'm not familiar enough with the Calder Valley line to make a guess if any improvements could be made to journey time between Manchester and Leeds, however 158s and 195s can accelerate more quickly and travel faster than Pacers so perhaps additional time savings can be made.

It is a shame that the required stock wasn't in place for the start of the new service. Passengers from Chester have been crying out for improved connections to the North East of England for years, but the use of Pacers on what is supposed to be a high quality service is not a good start. Hopefully the prices will persuade enough people to travel on the service despite it being slower than alternative routes and operated by a mix of antiquated stock and some refurbished units. Once the new class 195s begin to enter service journeys from Chester across the Pennines will be transformed and hopefully see even more passengers choosing to take the train.

Posted by Engineering Focus at 14:44