PLANTWORX is an event held every 2 years which brings together major players in the field of plant machinery from around the world, as well as a wide variety of small and medium sized companies who wish to demonstrate what they have to offer. The huge outdoor space allows companies to demonstrate their equipment, with working machinery on display, which in many cases provides operators the opportunity to try the equipment out for themselves. In 2017 PLANTWORX attracted over 15,000 visitors, ranging from construction contractors in charge of entire fleets of machinery to individual owner operators.

It has been 4 years since I last attended as I was unable to make it to the event in 2017, having first visited in 2015. Since then it seems there have been some major changes with regards to operator safety, especially in relation to operators of site dumpers. It's easy to see why this has become such a big issue, according to The Construction Index “Between June 2016 and July 2017 eight people were killed on UK construction sites by dumpers”.

This year there was a wide variety of site dumpers on display which have features aimed at addressing the risks associated with roll overs and poor viability. JCB has been one of the more high profile companies to try and address this issue with their Hi-Viz dumpers, ranging from 6 to 7 tonnes. JCB offers dumpers from 6 to 9 tonnes with their SiTESAFE cab, which provides increased protection for the operator. JCB say that “the cab has been tested to withstand a front dump impact or a side slewing impact, from a 13-tonne excavator“. The Hi-Viz range provides additional safety and vastly improved forward visibility with an innovative dumper design which allows an operator to see a 1.2m high person or object from 1m. The dumper is also wider and has a lower centre of gravity, providing extra protection against roll overs.

Thwaites who are synonymous with site dumpers have also sought to address safety concerns and now also provide their 9 tonne dumper with a fully integrated cab. The company also had a new product on display at PLANTWORX which aims to address visibility issues. Their “Super Seven” dumper, based on a 9 tonne platform with a 7 tonne capacity has improved visibility and 180° forward facing camera.

Wacker Neuson who are renowned for innovation and producing specialist equipment have taken site dumper safety a stage further with their Dual View platform. The company can provide 6 to 10 tonne dumpers which have a fully integrated cab, much like JCB and Thwaites, but their Dual View product has an extra trick up its sleeve. Within the cab the Dual View allows the operator to rotate the seat and controls through 180° and drive cab first. This system allows near-uninterrupted forward visibility and reduced risk when manoeuvring within tight work sites. You can see the Dual View in action here (11 minutes in). 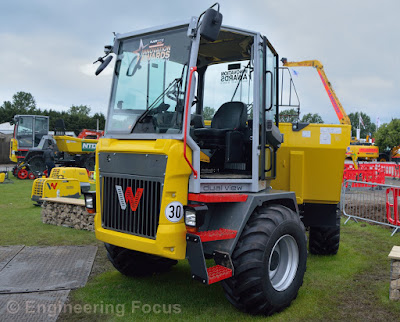 Ausa have also developed a dumper with reversible controls and were showcased their new R1001AHG 10-tonne dumper at PLANTWORX. Their system called “2 Way Drive” works much in the same way as the Dual View, with a seat and controls able to turn 180° allowing the operator to drive cab first. Ausa say “Thanks to this, AUSA is positioning itself as a market segment leader in the area of safety”. 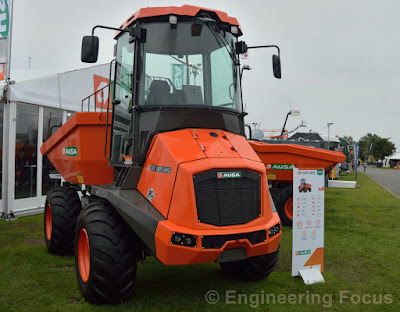 Contrast the modern dumpers with a couple of classics which were also on display this year.

Site dumpers aren't the only pieces of equipment being radically designed in order to improve operator safety, manufactures are now also starting provide solutions to the affect that vibrating tools have on operators. Wacker Neuson has gotten around this problem with their vibratory plate models by using an infrared remote control system, which they say “provides maximum safety: The operator is protected from vibrations, noise and dust”. The remote control system means that the operator need not touch the vibratory plate whilst it is in operation, cutting down the risks associated with vibrating tools. 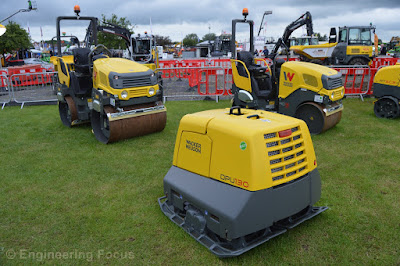 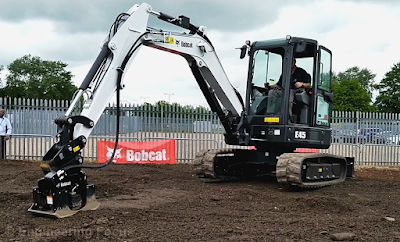 Although the risks associated with vibrating tools are not the same for ride on tandem rollers, BOMAG has sought to remove the operator from these too. Their “ROBOMAG” tandem roller is an autonomous version of their BW154, 7 tonne roller. The concept model was launched in bauma in April this year and was on display at PLATNWORX 2019. I didn't get to see it in operation but I did do a quick walk-around which you can see here (10 minutes 40 second in) 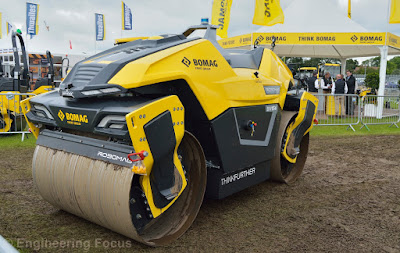 Although it is still in the early stage of development BOMAG say that “Based on geo-fencing and GPS data, it can autonomously compact a pre-planned area”. It may be a while until we see these machines on site however as the “ROBOMAG” which was developed in collaboration with Trimble is not available to buy yet. One of the main stumbling blocks at the moment seems to be more to do regulations rather than technological limitations. But rest assured autonomous equipment will be making their presence felt on worksites in the not too distant future.

Posted by Engineering Focus at 05:19