In my first RailLive 2019 post I wrote about the UK's first hydrogen powered train which caused quite a stir at this year's event. In this post I wanted to cover some of my highlights from the event. The site on which RailLive is held is enormous and there is a huge amount to see, so I chose before hand what I wanted to try to see in the limited time that I had

One of the first displays that I set time aside for was that of Mirage Rail who were demonstrating their mobile induction welding system. Using electromagnetic induction to weld sections of rail together is nothing new, however the mobile system developed by Mirage is unique.

The whole system which includes a generator, HIAB and induction welder can be mounted on a single rail trailer and towed by an RRV to wherever it may be required. The image below shows the entire system mounted on a rail trailer. 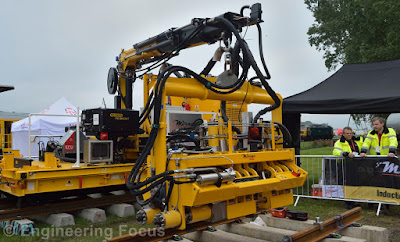 The induction welder which is manoeuvred over the rail using the HIAB, houses an induction coil which generates high-frequency electromagnetic fields to heat 2 sections of rail to 1300°C, the rails are then forced together using hydraulic rams which are clamped to the rails. As well as joining the rail, the system also has stressing capabilities built in. Some of the other benefits listed by Mirage rail include; “no operator exposure to molten metals, Reduced Operator risk, Automatic Shearing, No gas cylinders or hoses required for pre-heating and Low energy consumption (150KVa)”

The video below shows the induction welder in action, from start to finish.

RailLive 2019 like previous years had a massive array of rail plant on display and I hope to cover more of that in a future blog.  The event isn't solely focused on rail engineering or rail plant however, it also provides train manufactures, ROSCOS and train operating companies (TOCs) the opportunity to show off the latest trains which are being delivered to the UK network.

This year LNER brought along one of their new class 800 AZUMAs and invited visitors to come on-board and take a look around. I didn't want to give this opportunity a miss as it's unlikely I'll be able to ride one any time soon. As someone who lives and works in the North West I don't often get the chance to head over to the east of England, or South West where class 800s are also in service. 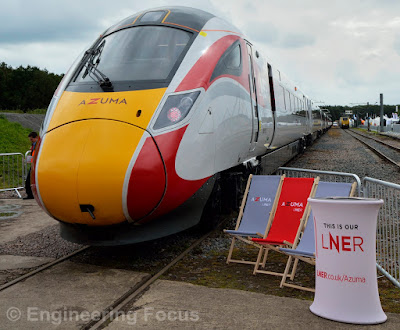 Passengers who live along the west coast corridor had up until now benefited from  some of most modern intercity trains on the network. The class 390 Pendolinos which were introduced between 2001 and 2004 revolutionised intercity travel along the WCML and were in part responsible for the doubling of rail passenger numbers on the WCML. The sleek, modern and fast trains cut journey times and introduced passengers to a whole new world in terms of rail travel.

It is hoped that the class 800s will have a similar affect on ECML routes to London. The AZUMAs will provide more capacity, with an additional 100 seats per train and it is hoped that there will be journey time improvements with the new timetable in 2021. The journey time savings probably wont be as dramatic as those achieved on the WCML with the Pendolinos, however new more spacious trains with modern features is bound (hopefully) to persuade even more people living along the ECML corridor to take the train.

There is one subject that does keep cropping up, and that is the standard class seating. Having read and heard that the standard class seats are not particularly comfortable I had to try one out for myself. Straight away I understood what people have been saying, the seats are firm, very firm. On the plus side there is plenty of legroom, not something you get very much of in a Pendolino in standard class, believe me. So there are some pluses and minuses, and if you want to get the maximum number of seats in a train, all while providing good legroom, PRM toilets, luggage and bike storage and a cafe, then something does have to give (or not give, if you're talking about the seat padding) to make extra space. Reducing the thickens of each seat by a few centimetres soon adds up to a lot of space saved. 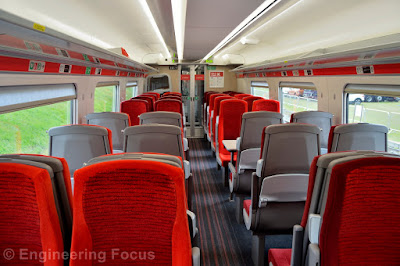 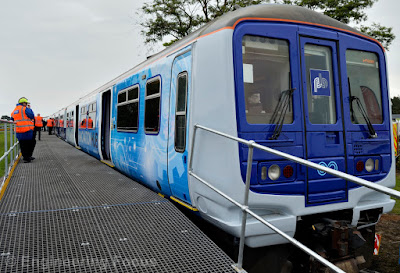 Over in the Innovation HUB there were seating solutions which did seem to save space but were actually comfortable to sit on. No I'm not talking about the ones pictured directly below, they are seating solutions for high capacity trains and are designed for short journeys. More of a perch than a seat, they offer maximum capacity whilst providing something which should be a lot more comfortable than just standing and the ones on the right had USB charging points. I'm not sure how popular they would be here in the UK, but I'm sure if people were given the choice between standing or perching on a metro or underground train, they would choose perching. 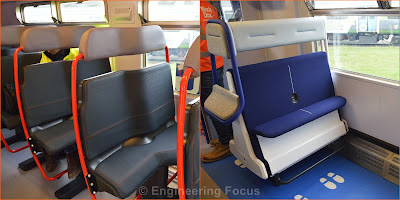 The picture below shows standard class (left) and first class (right) seating configurations fitted to the class 319 which was home to the Innovation Hub. I quipped we could do with some first class seating in Northern's class 319s, I don't think I was the first person to say that. More interesting though, keeping the AZUMA seating in mind, was the standard class seating arrangement. The seats appear to be light-weight and have minimal foam padding just like the AZUMAs, but these seats seemed so much more comfortable. So perhaps it is possible to design a space saving seat that isn't rock hard! 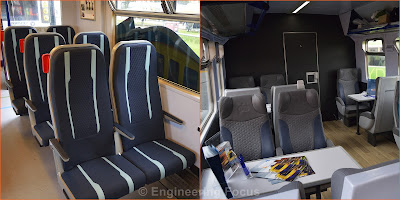 Porterbrook with their HydroFLEX unit aren't the only company providing solutions to the 2040 deadline for the banning of diesel-only trains. Vivarail have been working on number of solutions which includes diesel electric hybrids, which will hopefully enter service with TfW Rail this year. Last year they also showcased a battery version of the class 230 D Train, the 2 car unit had 4 battery rafts each providing 106kw. This year Vivarail had a single car battery vehicle on display. The unit was at the event to promote a fast charging system developed by Vivarail which can charge a battery powered train in as little as 7 minutes, providing enough charge for a range of 60 miles. 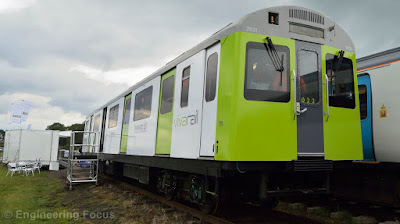 The system comes in 2 part, first the static section which can be located at a terminus, consisting of short sections of 3rd and 4th rail which provides the charge. The other part is the carbon ceramic shoe gear which has been designed specifically to be able handle the high currents involved.

As well as providing hybrid and full battery versions of their class 230 D Train, Vivarial also announced in May this year that they have teamed up with Arcola to develop a hydrogen fuel cell variant. The hydrogen powered unit is still in the development stage, but Vivarail say the first prototype should enter the testing phase in early 2020. 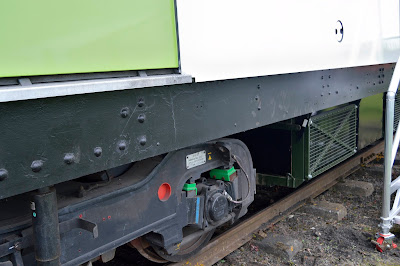 On a final note, I thought it was interesting being able to see inside the cabs of both the class 230, pictured below and the class 800, bottom image. The cabs are worlds apart, with the class 800 looking more like the controls of the Star Ship Enterprise. But the simple yet functional cab of the class 230 still gets the job done. 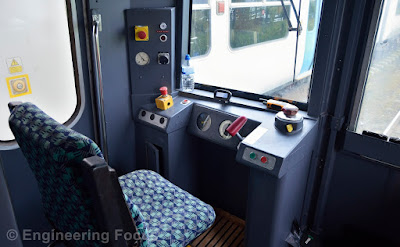 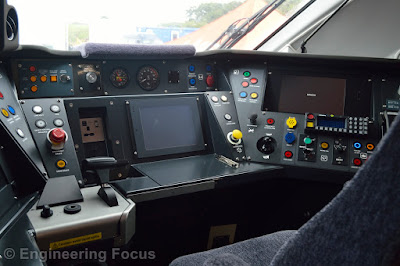 Posted by Engineering Focus at 07:14