In 2018 the UK Government announced its intention to phase out “diesel-only” trains from the UK rail network by 2040. An ambitious target which would be nearly impossible to achieve through electrification of the rail network alone. According to the DfT in 2009 just over 5000km [1] or roughly 33% of the UK's rail network was electrified, since then, and despite a wide spread programme of electrification between 2014 and 2019, that figure has only increased by an estimated 1000km. Given that the length of the UK rail Network is 16,000km, Network Rail would have to electrify 500km of railway every year for the next 20 years to electrify the remaining network by 2040. Considering it has taken 5 years and cost in the region of £4-5bn to electrify just 1000km of railway you can see how this would be a challenge to say the least.

This means then, that the challenge to phase out diesel-only trains by 2040 has been passed to train manufacturers and rolling stock leasing companies (ROSCOs). I'm fairly certain there will be some diesel-only trains still in operation after 2040, as Northern's class 195s which are being delivered now and Transport for Wales' new units which wont be delivered until 2021 will be powered solely by diesel. It is inconceivable that the government would force ROSCOs to scrap or re-engineer rolling stock which will be 20 years old or less by 2040, that would be wasteful and expensive. However the challenge faced by ROSCOs and manufactures is to develop new ways to power trains between now and 2040.

Luckily it seems that companies and organisations in the UK are well on the way to developing new power technologies which will eventually put an end to diesel-only trains, whilst not requiring the electrification of the entire UK rail network. Vivarial displayed a battery version of their D-Train at RailLive last year and has since gone on to develop a fast charging solution, which can charge a set of batteries in 8 minutes, providing a range of 60 miles. I will be writing more about that in a future blog.

Porterbrook Leasing have also been developing their own upcycled, re-engineered rolling stock based on the class 319 of which 84 were built. Porterbrook already has orders for a tri-mode class 769 variant of what they call their “Flex” units, which are currently having diesel engines fitted, allowing them to switch between DC, overhead and no-electrified lines. Transport for Wales, Northern and Great Western Railway are expecting units, with a total of 38 units on order.

Not content with converting 319s to tri-modes, Porterbrook, working in collaboration with The University of Birmingham’s Centre for Railway Research and Education (BCRRE) have developed the UK's first hydrogen powered train. The first “HydroFLEX” unit was demonstrated at this year's RailLive event, taking passengers gingerly along a section of track at the Quinton Rail Technology Centre.

The unit on display was powered by a singe 100kw hydrogen fuel cell combined with a 100kw battery and was carrying 20kg of hydrogen. The next step is to fit the unit with 2, 100kw fuel cells and 2, 100kw batteries, before beginning testing on the mainline. The unit will be able to hold 200kg of hydrogen in total, which it is estimated should be enough to power the unit for 1600km. The fuel cells and tanks, as well as the control systems are all housed in 1 of the 4 carriages. 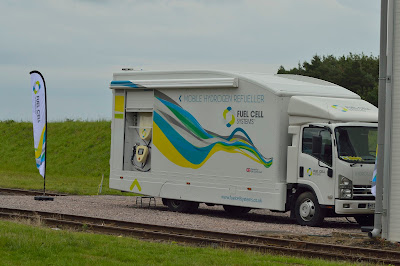 The first public outing for the HydroFLEX has caused quite a stir, with the BBC attending to film the train in action and to interview those involved. The team from Porterbrook, BCRRE and Fuel Cells Systems who supplied the hydrogen were busy ensuring that everything ran smoothly and were on hand to answer any questions.

Alex Burrows, Director at Birmingham Centre for Railway Research and Education, commented: “This is a great success story for the UK Rail Industry, which shows our capability and commitment to helping the government meet decarbonisation targets. Key to this success is the close partnership between academia and industry which has enabled us to pool the expertise needed to rapidly progress this technology from concept to full-scale working demonstrator.” 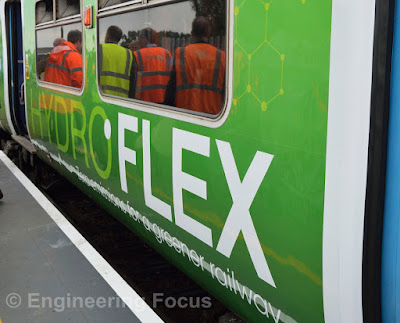 The demonstration seems to have been a real boon for the UK rail industry, generating positive news for the industry which doesn't always get an easy ride from the mainstream media. The HydroFLEX demonstrates that the UK rail industry can deliver innovative solutions to looming challenges, and that the UK can be a world leader in the development of alternative power systems for rail vehicles.

The fuel cells and batteries themselves are based on tried and tested technology, and have been sourced from around the world. What makes the HydroFLEX innovative is the control system being developed by BCRRE. The complex control system must work seamlessly to balance fuel delivery and energy output, whilst monitoring the battery and energy recovery through regenerative breaking. The system is what brings everything together to make the HyrdoFLEX a unique and world leading train.

Although powering trains with hydrogen fuel cells may not be the only answer to removing diesel-only trains from the UK rail network, it is one solution that could help the government deliver its 2040 promise. Apart from the remaining class 195s and Civity based DMUs to be delivered to TfW, which should end their service some time around 2050.

Posted by Engineering Focus at 16:55