On a incredibly foggy afternoon in November the latest additions to Liverpool's skyline made their way into Liverpool bay. A small group has gathered in New Brighton on the opposite side of the bay in anticipation of their arrival. Unfortunately November 2nd turned out to be one of the foggiest days in recent times, so the expectant onlookers could only glimpse the ghostly silhouette of the enormous structures making their way into the bay. 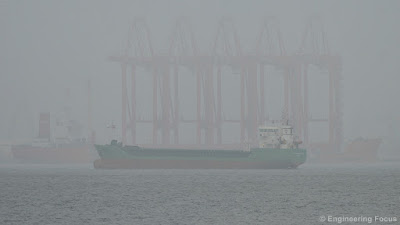 The structures in question are the first 5 ship-to-shore cranes which will soon take their place on the waterfront as part of the expansion of Liverpool's container terminal. The new river facing terminal will eventually have 7 so called "mega-max" cranes which will be able to load and unload 2 14,000TEU (Twenty-foot equivalent unit) ships at a time.

The cranes themselves stand 92m high and weigh roughly 1600 tonnes each. Given the size of the cranes it seems remarkable that they were transported 30.000km by sea from China, sat atop an ordinary looking cargo ship, all be it sat very low in the water.

On my return to New Brighton a week later 2 of the cranes had already been offloaded and were resting on their new tracks ready for commissioning. The unloading process is remarkably straight forward given their size and weight. 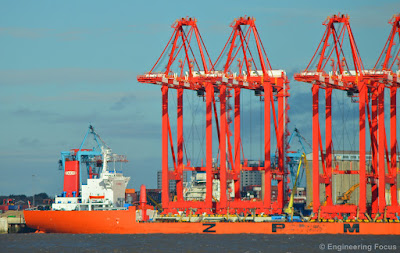 Put simply the cranes are slid off the ship with the use of specially constructed dollys which sit on rail as well as a system of pulleys and winches. Obviously this is a precarious task which relies on precise coordination which must be timed precisely with the ebb and flow of the tide.

There is a video on Youtube which demonstrates the process in action.

Another key milestone for the Port's expansion was reach on the 27th of October when an new biomass handling facility entered service. The new £100m facility will supply wood pellets shipped from America to the Drax power station in North Yorkshire.

The pellets Drax is using are made from waste products from the forestry and milling industry, as well as residual agricultural products, such as straw and energy. The company claims that the CO2 saving of using biomass over coal are 80%, even after harvesting, processing and transportation are taken into account.

The new concrete silos which will store biomass for Drax

The new container terminal and biomass handling facility constitute a £300m investment in the port by the owners Peel Ports, this investment will help to deliver 400 jobs and support the creation of a further 4500 indirect jobs.

The first phase of the new container terminal is due to be complete at the end of the year, with phase 2 to be complete next year with the arrival of a further 3 ship-to-shore cranes.