Rail Live is billed as "one of the largest outdoor rail exhibitions in Europe. Based in the Rail Live offers companies the unique opportunity to showcase products and services in a real rail setting". And it certainly doesn't disappoint, with over 300 exhibitors spread over a 120 acre site.

With so many exhibitors it could be easy to get overwhelmed if you're not sure what you're looking for and with the sweltering heat of the day exploring the event wasn't easy. All I knew was I wanted to find the new, unusual and the impressive.


First stop though (for a good 10 minutes) was RVT Group's stand, talking to one of their representatives was a perfect excuse to cool off in front of one of the powerful fans that they had switched on. A perfect demonstration of how powerful and effective the ventilation systems they provide are. 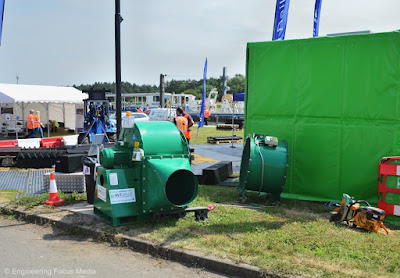 After cooling off I didn't have to travel far to find "the impressive". Sonic Rail Services certainly had one of the most impressive displays at the event. SRS who provide permanent way works and electrical track maintenance, boast their own fleet of HGVs and plant machinery which they themselves maintain. What better way to demonstrate their capabilities than by hoisting a 30 tonne road rail excavator 2 to 3 meters in the air. 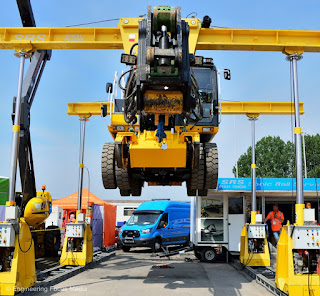 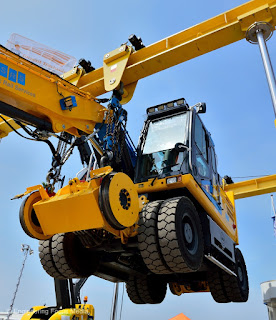 Keeping with the plant machine theme, Ground Control had one of their unique Menzi Muck machines on display. This wheeled excavator is able to access sites than would stop other excavators in their tracks (excuse the pun).

Each wheel is attached to an independently controlled arm, allowing the Menzi Muck walking excavator to operate safely on steep inclines and on uneven terrain making it ideal for works involving embankments and difficult to reach locations. 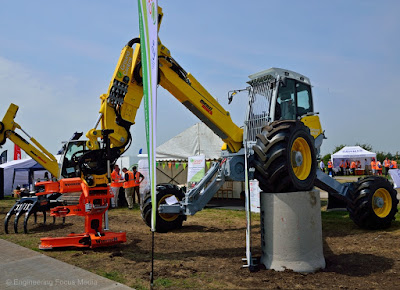 I think the usual title has to go to Searchwise Ltd who were demonstrating underwater equipment with the help of a container full of water and diver, who was probably happy to be inside the tank for change (given the heat outside) 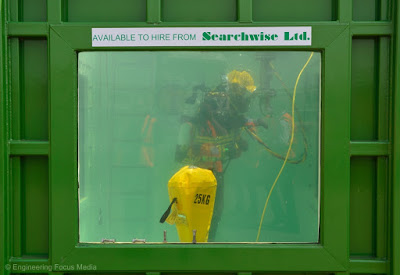 On the rails, two impressive rail machines were on display.

Balfour Beatty had brought along its High Output wiring train which they say is "capable of installing a full tension length of 2,000m of catenary and contact wire simultaneously under differing tensions in around four hours" [1]

The train is able to travel to and from possessions at a top speed of 50mph and once on site the train can operate whilst the adjacent line is open. 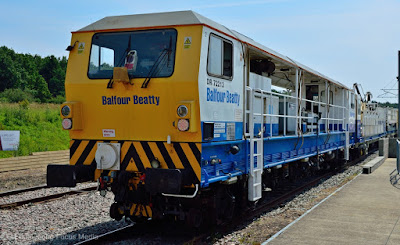 At the other side of the site S&C North Alliance a partnership of Amey, Rhomberg Sersa and Network Rail were demonstrating a machine which will be used for the excavation, transportation and distribution of ballast.

On track was a specialised conveyor system which can dispense ballast between the rails or to the side of the track. This conveyor system works in tandem with MFS (Materialförder- und Siloeinheit, or material conveyor and storage) wagons. The MFS wagons on display at the event had the ability to travel both on and off the rails thanks to two pairs of crawler tracks.

The off rail capability allows the MFS wagons to transport and dispose of spoil from excavations. The MFS wagons are also designed to work in conjunction with an inline conveyor excavator which will be delivered to the UK in July.


Video of the conveyor in action 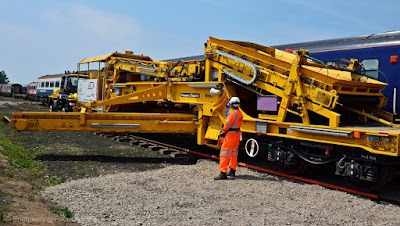 An MFS wagon being demonstrated off the track 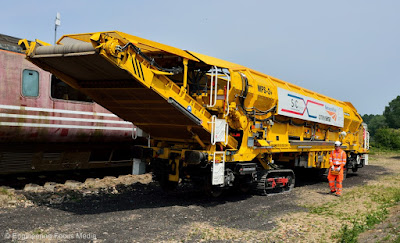 Finishing where I ended my visit, with a stand that caught my eye just as I was making my way back for the return shuttle. It was hard to ignore the ordnance that First Line Defence had on display, a reminder of German bombing campaign during WWII, which has left thousands of un-exploded shells scattered across Britain.

First Line Defence are there to help identify potential risks and locations where un-exploded bombs may still remain. If shells are identified FLD can direct the MOD to dispose of them safely. 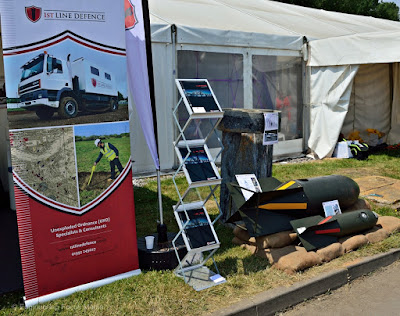 These images and more are available by request, please e-mail Info@EngineeringFocus.co.uk

My journey to RailLive this year started at 6:15am, took 4 hours and involved 4 changes of train just to get to small village called Honeybourne in Worcestershire, from there I would would catch the prototype D-train to RailLive. It was a long journey but ultimately worthwhile as I would be among the first passengers to ride VivaRail's prototype train.

D-Train waiting at a temporary platform built especially for RailLive at Honeybourne station.
(click to enlarge) 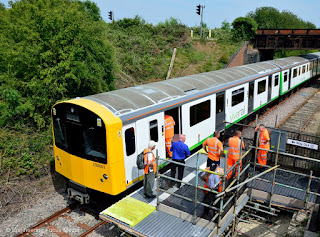 
The D-Train or class 230 was the brainchild of Adrian Shooter who saw an opportunity to use rolling stock that was coming out of service and would have eventually been scrapped and instead give the stock a new lease of life, whilst at the same time providing much needed DMU (diesel multiple unit) rolling stock which the UK rail network is desperately short of.


In November 2014 Vivarail chaired by Mr Shooter purchased 150 driving motor cars and 300 carriages of London underground D78 stock which has since been replace by new S stock built by Bombardier. The idea being to combine these carriages to form 2 and 3 car trains, at the same time each of the drive motor cars would be fitted with diesel engines, converting them into self propelled DMUs.

When the project was first announced it faced heavy criticism from the media who labelled the trains as "London cast offs". It was to be expected with some of the trains dating back to 1978, it was never going to be popular idea with the mainstream media, who would need some convincing.

However from the moment I heard about this project I was a supporter, I'm a big believer in recycling (or in this case upcycling) and the UK was and still is facing a nation shortage of DMU rolling stock, a problem that will only get worse come 2020 when new rail vehicle accessibility standards come into force.

D-Train at the temporary platform at Long Marston 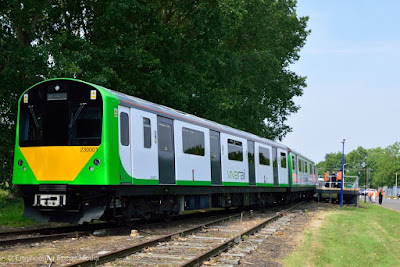 The new class 230 units will come in either 2 or 3 car formations, each set fitted with 4 Ford Duratorq engines producing 200hp each, giving a power output of 400bhp per driving motor car.

The 5 cylinder, 3.2 litre Duratorq engines which comply with IIIB emissions standards are fitted to commercial vehicles and Ford Ranger pickup trucks. By being "off the shelf" this helps to reduce costs and means the engines have a proven track record.

Each engine is married to a generator and placed into a cradle to form a powerpack. Each powerpack can be lifted in and out of place for maintenance, this helps to reduce maintenance cost and means the engines and generators can me maintained without the need for large depots or heavy lift facilities.

The power output of 800ph per unit far outperforms a class 150 which only produces 572hp, in addition a 2 car class 150 weighs 70 tonnes, whilst a 2 car class 230 with its aluminium body weighs around 60 tonnes.

Since I wrote this article Vivarail have secured funding from the Government's accelerating innovation in rail competition, which aims to "support growth in national and international rail markets". The grant is in recognition of the developments the company has made in developing battery technology

VivaRail state that they are "on track to be the first UK manufacturer to build production battery trains." Which the company say are capable of operating for up to 120km between charge.

For me information you can read VivaRail's press release here

The two powerpacks underneath each driving motor vehicle. 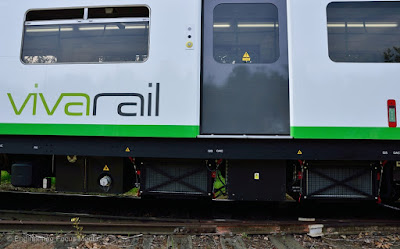 Each train is to be treated as an empty shell with train operating companies able to specify interiors which suits the particular needs of the routes which they will serve. The interiors will feature modem amenities like disable access toilets, charging points and wifi, and to the public will be no different to a brand new train.

The prototype that was used on the shuttle between Honeybourne and RailLive had a number of seating configurations to show what is possible.

As a supporter of the projected since its inception you would expect a glowing report and yes that it was I am going to give this train. From a passenger perspective and having travelled on 6 production DMUs on that day alone I can honestly say you would not know you were on a train dating back to the 70s.

As someone who has been involved in campaigning for this train to provide a service on the line local to me, I can say that without doubt it would be far superior to the class 150s which currently serve on the line.

The class 230 even with 2 engines per driving car was quiet and the acceleration was smooth. And even with the engines revving up to 3000 rpm under acceleration the sound was quieter and more refined than the tappety sounding engines fitted to 15Xs and even newer 170s and 185s.

Only slight niggles, perhaps the interior looked a bit bland, but its is only prototype and each train operating company is free specify any interior they wish. Also I could see daylight trough some of the door seals, but again this is a prototype and that could easily be fixed.

Over all I am impressed with what has been achieved in such a short space of time and would be happy to be a regular passenger on this train.


These images and more are available by request, please e-mail Info@EngineeringFocus.co.uk