This is the second part of the blog looking at some of the highlights from Rail Live 2016, you can find part 1 here.

One of the many live demonstrations taking part throughout the 2 day event was that of Railcare's RailVac system. By now most people will be familiar with truck mounted vacuum excavation systems that are now common at sites in city centres wherever utility works are underway and space is limited.

The RailVac RA7 (or to give it's full title Ballast Vacuum Extraction System) takes that to a whole new level, with a powerful rail mounted vacuum system capable of vacuuming rail ballast from in between sleepers with ease.

The system can be used to excavate for re-ballasting S&C's (switches and crossings) and plain line, excavation of existing UTX's (under track crossings) or excavation to install new UTX's or simply to expose buried and broken drainage pipes. 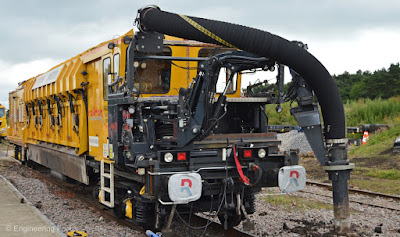 The operator at the controls of the machine was able to excavate the ballast from around and underneath a number of sleepers in mere minutes. Not only was he in control of the suction pipe, which has a nozzle capable of spinning 360° in order to loosen compacted ballast, but he was able to move the vehicle itself using the remote control system. 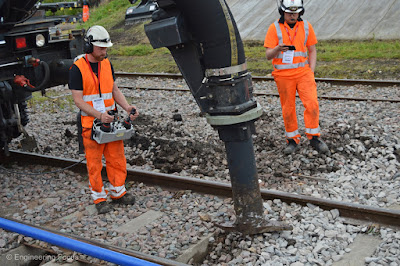 Within less than 5 minutes several sleepers had been exposed and undercut, with this speed Railcare claims it is possible to excavate a UTX 1 metre deep in around 10 minutes. 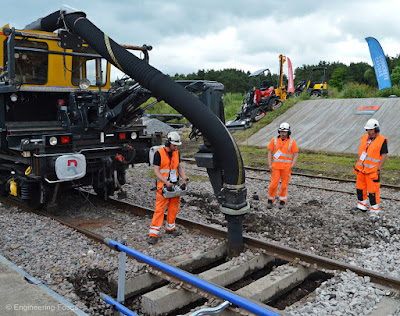 The images don't do the controller justice so we have added a video to Youtube to show this impressive machine in action and to show the impressive skill of the operator.

Another impressive piece of kit that caught my attention was the Strabag RRV rail milling machine. Unfortunately I didn't get to see it in action but thought it was worth a mention. This was the first time the machine had been on display at such an event in the UK since it's arrival in 2010 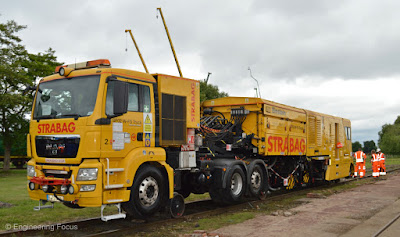 The SF02 W-FS Truck is able to travel between sites powered by a MAN TGS tractor unit which produces 480bhp. Once at site the vehicle can be set up from road to rail mode in under an hour and then travel by rail to the work site at 45km/h.

The 480bhp engine provides power directly to the rail wheels rather than providing traction through the road wheels. The engine also provides power for the milling machine housed within the trailer section.

Once set to work the Strabag SF02 is able to process between  6 and 15 metres of track per minute and is able to re-profile track in a single pass dependent on track condition. Track with heavy damage may require 2 or 3 passes.

In 2010 during trial work the machine was able finish 4100 metres of track with sections with sever damage over 6 shifts. 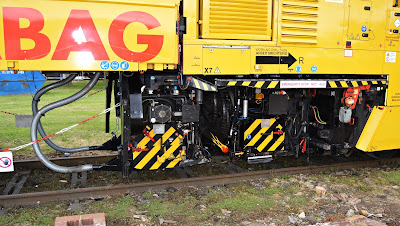 With the environment in mind the system leaves no waste behind, instead swarf is vacuumed up as the machine travels along, the swarf can then be unloaded and taken away for recycling.

During operation around 1500 to 2000 metres of rail can be milled at a time, after which time the milling heads must be changed. This can be done in 20 minutes so little time is lost and with 3 sets of heads kept on board the machine can finish up to 3500 metres of track per shift.

The machine can be returned back to work within 12 hours between shifts as the tips of the heads are replaced in a purpose built support trailer which travels with the machine.