On Sunday the 21st of September (2015) Network Rail finally unveiled the new enlarged concourse at Birmingham New Street station. The culmination of 5 years work requiring the effort of 1000 engineers working on site 24 hours a day, 7 days a week.

The new concourse which is the size of 13 Wimbledon centre courts is now bathed in light thanks to a new 3,300 square meter roof made from steel and ETFE (Ethylene Tetrafluoroethylene). The new roof introduces light to the station for the first time since the Brutalist concrete station was built to replace the original station in the 1960s.


The impressive roof which covers the new concourse 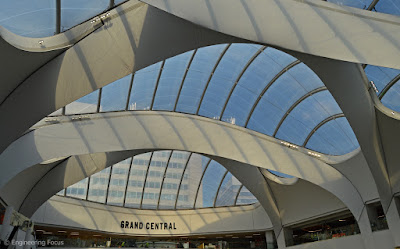 The £600m project to refurbish the station was part of a larger £750m development which also included the redevelopment of the old Pallasades shopping centre. The shopping centre now re-branded as Grand Central contains 200,00 sq ft of retail space as well as a new 250,000 flagship John Lewis store 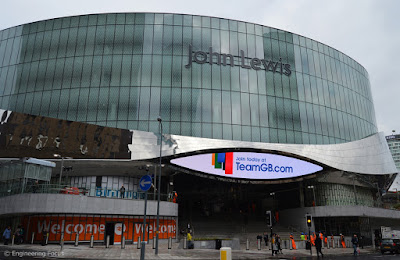 The £600m price tag of the station development may come as a surprise, especially considering that no new train capacity has been provided, however there was never any doubt that the station was in need of major redevelopment.

Birmingham New St is the busiest station outside of London serving 170,000 passengers every day, despite the fact the 1960's station was only designed to handle about half that number. The new station concourse and platform alterations will enable the station to handle almost double the number served today.

In order to accommodate so many passengers, 30 new escalators and 15 new lifts have been installed, as well as 6 separate entry/exit points each with 10 ticket gates. Below the concourse all 12 platforms will be improved to allow better passenger flow and to open up the platform level making it seem less claustrophobic. Work was still underway on platform 5 on the day of my visit.

The view through the de-cluttered platform level

Despite being the busiest station outside of London the 5 year development of the station continued whilst it remained open to the public. This was achieved by phasing the works, with a small concourse area developed first which opened in 2013. This allowed for the closure of a much larger area which involved the closure of the Smallbrook Queensway exit.

The closure of the exit allowed for the massive task of the removal of 20,000 tonnes of concrete to create the new atrium. In order to bring light to the new concourse enormous holes were cut through several floors made of steel reinforced concrete. The removal of concrete relied on the use of special remotely operated excavators which allowed the operator to work safely from a distance whilst the machine broke up the structural concrete.

In order to reduce the impact of the development on commuters and people working and living within the city Network Rail made use of trains to transport waste material away. The use of trains saved 10,000 lorry journeys from the city centres roads.

There was still a lot of work ongoing during my visit on the 22nd of September, Platform 5 was still being refurbished and external work is still yet to be complete on the Stephenson Street exit. Despite this passengers and members of the public were still able to enjoy the new atrium and the striking architectural features on the Southside and Smallbrook Queensway exists.

Work continuing on the external features of the Stephenson Street exit. 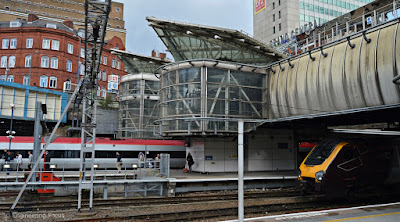 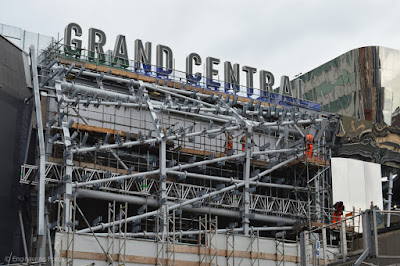 A few images of the striking architectural features, such as the reflective cladding and "media eye" 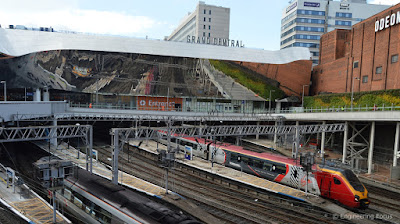 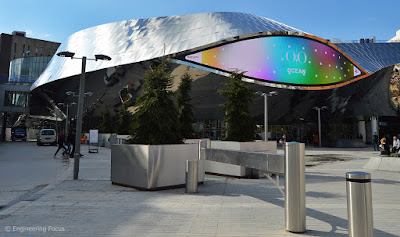 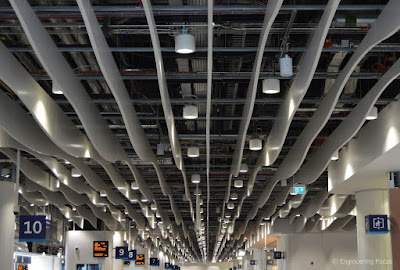 Some may question the £600m cost of the redevelopment, however I doubt that many will question that the station was in dire need of development or the success of the development itself. The building is striking and along with the Bullring it is a genuine architectural asset to the city. More importantly though the station now works for passengers and has enabled it to handle an ever increasing number of passengers.

More pictures can be found on our Facebook page

Posted by Engineering Focus at 21:50 No comments: