In part of one of this series of blogs I wrote about the the likely methods that will be used to undertake the ground works in rural areas for HS2. In this second part I will investigate the bridge structures required and how disruption to the existing road network can be minimised.

One of the most common structures that will be built will be road overbridges. For HS2 phase one a large number of road overbridges will have to be constructed although I was unable to ascertain the exact number.

Luckily for motorists and local residents most bridges can be constructed with limited disruption to the road network. Many bridges are now constructed away from the existing road, this allows the road to remain open throughout the majority of the construction process. 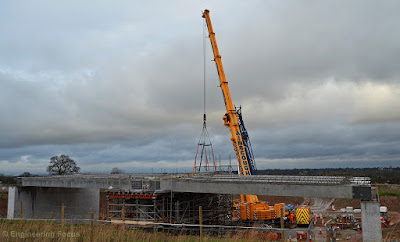 If the bridge must be constructed on the original alignment of the road, a new temporary road alignment can be constructed, again reducing the need for road closures. Usually the only times when roads are required to be closed is during the "tie-in" process, this is when the existing road is connected to the new road alignment.

Building road overbridges is relatively straight forward and are usually constructed in 1 of 2 ways. if the railway is to pass under the road in a cutting then the ground to one side of the existing road is excavated down to required the final depth.

After the earth is excavated foundations can sunk and the construction of the bridge can begin. Concrete reataining walls and piers will be constructed onto which the new road deck will be placed. Piers and walls can either be poured into moulds in situ or can take the form of pre-cast sections made off site and then lifted into position. 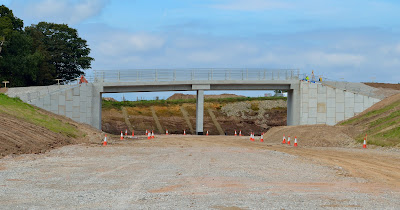 The image below shows a nearly completed bridge taken from the existing road which remained open throughout the majority of construction. 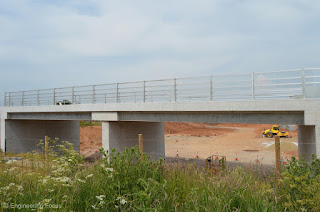 The second method is used where the railway will run at level to the existing road, in this case the road is raised to cross the line. With this method the building of the bridge structure is the same, however earth is built up onto retaining walls either side of the bridge onto which the new road alignment is constructed.

In the image above the new road is level at the point where it crosses with and existing road, in this case the bridge was built at the same level as the existing road. Earth was built up either side of the bridge to create gentle slopes up to the bridge. The existing road was then diverted up and over what would later become a new grade separated dual carriageway.

Minimising disruption to  motorists and local residents will be paramount for HS2 as it is for any large engineering project. Fortunately civil engineering companies are well versed in building this sort structure and a great many have been constructed for road and rail projects up and down the country.

In the third part of this series I will look specifically at how HS2 will cross and intersect with existing railway lines. The method used for crossing railways is similar to that of roads, however different standards must be observed and some different techniques employed.


On the 6th of February 2017 the A556 opened to traffic,  the new road linking the M56 near to Altrincham to the M6 close to Knutsford will ease congestion along this busy corridor which provides access for motorists from South Manchester who wish to access the M6.

Rather than describing the route and displaying images I thought it would be best if I simply drove along the new route, starting at the M6 junction 19 and finishing at the M56 junction 8 heading eastbound.

It appears that there have been some issues with the traffic lights at Junction 19 of the M6, with motorists reporting increased congestion. A statement was posted on the A556 Facebook Page stating that engineers are currently monitoring the phasing of the lights.

"........ It became obvious during the peak periods of traffic on Monday afternoon and Tuesday morning that there is still an issue with the traffic signals.

Highways England apologises for the disruption that this has caused and currently have engineers on site investigating the issue. They have identified a fault which they hope to resolve shortly and which will return the traffic signals to full working order."

I will update on the de-trunking works in a few months, this final phase will provide improved cycle, pedestrian and equestrian access along the B5569 (Old A556).