Vivarail has today (01 March 2018) announced that it has entered into an agreement with West Midlands Trains to build three new class 230 D-Trains for use on the Marston Vale line between Bedford and Bletchley. The D Trains which will enter service in 2018 will be the first trains to be introduced within the new West Midlands Trains franchise.

Vivarail’s CEO, Adrian Shooter, said “This is a big day for Vivarail. We have invested considerable time and money to bring our innovative D-Train to this point and we are delighted to be working with West Midlands Trains to introduce them into passenger service. As a West Midlands based company it will be extremely gratifying to see our trains running on local lines and we look forward to passenger feedback."

West Midlands Trains’ customer service director, Andrew Conroy, said “We are investing in almost £700 million of new trains for our passengers. The class 230s will be the first of over 400 extra carriages we are adding to our network. These trains are ideal for Bedford to Bletchley route. I am sure our passengers will welcome the new look and feel of the carriages and the extra space. When the new trains come on stream in December we will also be adding extra early morning and late-night services on the Marston Vale line Monday to Saturday.” 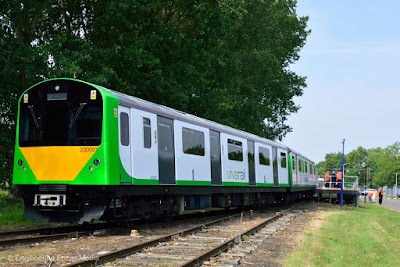 This welcome news comes less than 2 weeks after Vivarail announced that a battery-powered version of the D Train number 230 002 has entered the production phase. It is hoped that the unit which will have a range of 50 miles after just a 10-minute charge will be ready to go out on the network fully approved for passenger service by the summer (2018)

It is assumed however that the 3 units for the Marston Vale line will be powered by convention diesel-electric traction. Diesel-electric units are fitted with 4 Ford Duratorq engines producing 200hp each, giving a total power output of 800bhp per set which will come in either 2 or 3 car formations.

No specific details were given about the interiors but Each D Train is treated as an empty shell with train operating companies able to specify interiors which suits the particular needs of the route. A pre-production unit which was used for testing and demonstration had a variety of seating options fitted in order to show what is possible. Each train will be fitted with modern amenities such as USB charging points, wifi and will be fully PRM TSI compliant

The order for 3 trains may be relatively small but it proves that Vivarail is able to provide tailored solutions for routes which have specific requirements within a short space of time. There are many more rural lines across the country which require only a small number of units but are desperate for additional capacity and modern rolling stock.

I think we will be hearing more good news from Vivarail this year.