It was 3years ago when I first took a ride on the first prototype class 230, since then things have certainly moved on. The diesel powered 3 car unit which shuttled people between Honeybourne and Rail Live in 2017 has been developed into a diesel electric hybrid with advanced power systems and has also had a striking facelift.

The new hybrid units, which are a first for the UK, are very much like self charging hybrid cars. The 4 diesel engines housed underneath the centre vehicle charge 4 battery rafts, 2 under each driving vehicle. Power to drive the traction motors is taken directly from the batteries, with the motors able to return power back to the batteries using a regenerative braking system.
[update] I was made aware that the traction motors can take power directly from the engines, this is something didn't know before. But thought it is an important piece of information to share. I wasn't informed when the traction motors would likely need to take power directly from the engines, but the ability is there if needed, perhaps if the unit was full and making its way up the steep incline from Shotton towards Hawarden, or in the event one class 230 is required to rescue another. 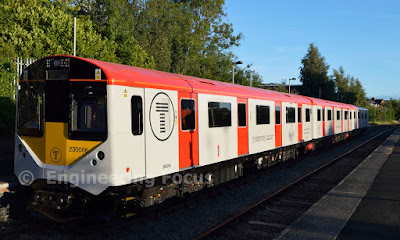 The class 230s which have been built for Transport for Wales Rail are fitted with a 2 stage wheel slip protection system, with 1 stage able to precisely control the power being delivered to the wheels in order to prevent the wheels from slipping. This system will prove useful on the Wrexham Bidston line for which the units are intended. The line has many station stops, some spaced closely together along the 30 miles route, with a steep incline from Shotton up to Buckley which provides a challenge for train and the driver in wet conditions and during the autumn leaf fall season.

So far only 230 006 has made the journey north from Long Marston (where it was constructed and tested) to Wrexham. 006 is due to commence line specific testing once a second class 230 becomes available. Having 2 units stabled locally will mean that should a unit fail whilst out on the line for whatever reason, either one could recover the other.

007 is currently undergoing mileage accumulation on the Cotswolds line, as is 008, with 009 nearing completion. In total Transport for Wales Rail has ordered 5 units from Vivarail which, once delivered and sufficient drivers have been trained, will enable TfW to increase the service frequency on the Wrexham Bidston line from hourly to half hourly, starting from December 2021.
Having supported the D Train project from the very beginning and being part of the campaign for them to operate on the Wrexham Bidston (Borderlands) line, I must admit to being more than a little excited to hear 006 was making the journey to Wrexham on Monday (20th July). Having only seen pictures of the unit on the Cotswolds line it was good to finally get a chance to see the unit up close. It really does look fantastic, almost completely unrecognisable from the D 78 stock on which it is based.

The best bits of the stock such as aluminium body shells and recently replaced bogies have been kept, but almost all of the rest of the unit is brand new. The insides have been completely striped back to metal and new fixtures and fittings installed. Heavy structural work has taken place to reinforce the drivers cab and the gangways between carriages have been widened. 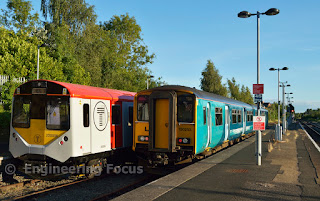 Class 230 006 along side a class 150 which are set to be replaced on the Borderlands Line.

A small minority bemoan the use of the word "new" to describe the 230s, but given the work that has been carried out I think it's fair to call them new. The D78 stock on which the class 230 is based may technically be older than the class 150s they're set to replace, but the difference in look and passenger facilities between the 2 units is night and day. Hopefully passengers will be able to judge for themselves soon, but I'm certain when the the 230s do enter service, the average passenger will have no idea that the train they are traveling on has its basis on a train dating from 1978.
[update] Since this blog was published, 230 006 has completed a number of test runs from Wrexham to Bidston and back again. During each run the unit has stopped briefly at each station along the line. Below is a video which compares the class 230 to the class 150 from a standing start, departing Neston station.
Update: side by side class 230 vs class 150 from a standing start.
More videos of 230 006 available here.

Posted by Engineering Focus at 09:16 No comments: