The Mersey Gateway project has now been under construction for almost 3 years and is due to be completed on time later this year.  The bridge itself is taking shape and on the 10th of March (2017) construction of the bridge deck had reached the half way mark.

The cable stayed bridge spans have been inching out across the Mersey since Autumn 2016, with 6 bridge sections being built simultaneously. Each of the 3 bridge pylons supports 2 'form travellers' which act as giant moulds into which concrete is poured.

The image below shows a close up of one of the form travellers making its way out across the River Mersey. The traveller rests on the previously constructed bridge section, the main form then extends out over the river.  Before the concrete for each new section can be poured the form is fitted out with steel rebar, an internal form to create a hollow cavity within the bridge and an anchor point on to which the stay cable will attached.

Once the stay cable is attached from the pylon to the anchor point the concrete to form the new bridge section can be poured. The total length of the main bridge span will eventually be 1000 metres in length. 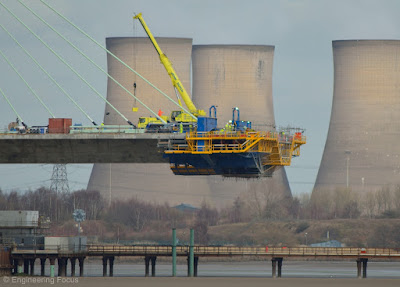 The bridge will be supported by 146 stay cables connected to the 3 pylons with each cable containing 91 individual steel stands encased in a protective outer casing. In total 810 miles of steel strands will be required to support the 53,000 tonne structure. 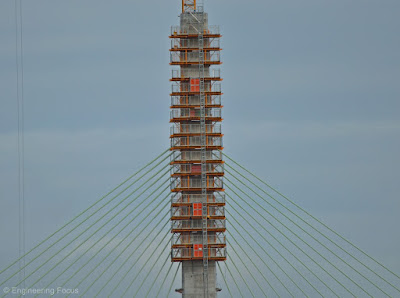 The images below shows progress on the bridge as of March 2017. 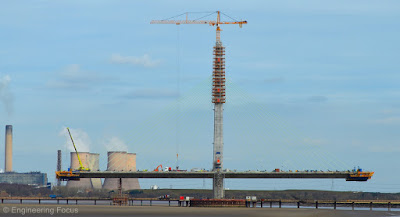 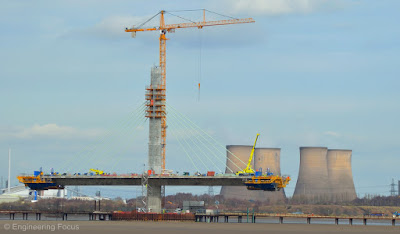 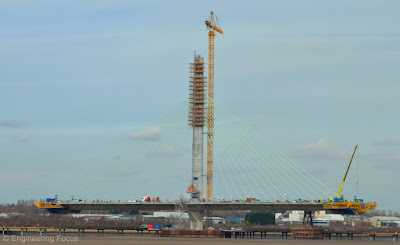 The approach viaducts to the main bridge are also progressing well, MSS (Movable Scaffold System) Trinity which was being used to construct the approach viaduct on the Widnes side of the river is now in the process of being dismantled. The 'wing traveller' which is being used to widen the viaduct to final width was approaching the final span in March 2017.

Meanwhile on the Runcorn side of the Mersey MSS Webster which crossed the Manchester Ship Canal in December 2016 has almost completed construction of the southern approach viaduct.

Wing traveller working its way across the northern approach viaduct 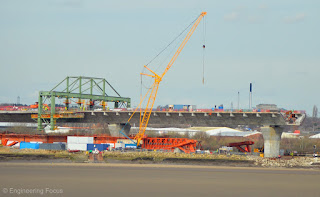 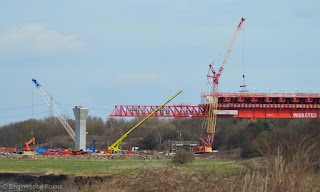 Another key milestone was reached on the 29th of March this year (2017) when the final beam was installed on the Astmoor Bridgewater Viaduct, which in itself is a massive feat of engineering. The image below taken in August 2016 shows the scale of the viaduct under construction at Astmoor. 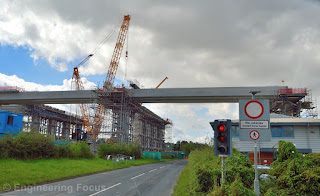 Work on the existing road connections is progressing well with key elements already complete such as the new roundabout for the M56. I will update on the progress of the road connections in the coming months prior to completion which is still set for Autumn this year (2017)