Back in August 2015 I reported on the project underway to upgrade the existing road connections that will eventually connect the M56 and A562 Speke Rd to the new bridge. At the time the sites in Runcorn and Widnes were just being prepared for work to commence. Now however a great deal have been achieved since then and some elements of the project are gearing up for completion.


The map shows the new route traffic will take from the M56 to Liverpool. 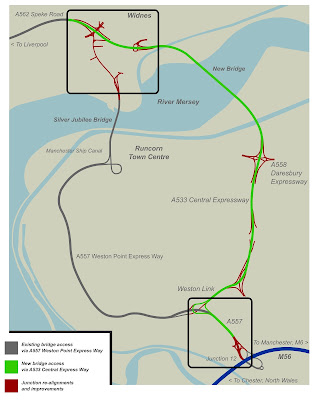 In Widnes work to connect the A562 to the new bridge reached a crucial stage, in March (2016) the link which connects the current Jubilee bridge to the A533 was permanently closed. This closure was to allow engineers to begin demolition of the existing flyover which crossed Ditton Junction. Now work is underway to construct a new flyover which will take traffic over Ditton Junction and onto the new approach viaduct leading to the new bridge.

The images below show some of the progress which has been made to build a new road which will connect the A562 with the new bridge. To the right of the image a new junction will be constructed which will take traffic from the A557 Queensway onto the new connecting road.

To the left of the image the connecting road will join the the A562 Speak Road, in addition Ditton Junction will be remodelled, with the exiting roundabout converted into a flat traffic light junction with the a new flyover which will provide a free flow link between the A5562 and the new bridge.

The new flyover will be opened only when the new bridge is finished, therefore traffic will continue to be diverted from the Jubilee Bridge and on to the Ditton Junction roundabout until Autumn next year when the project is due for completion. 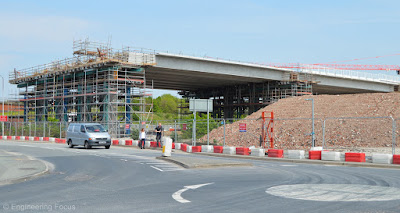 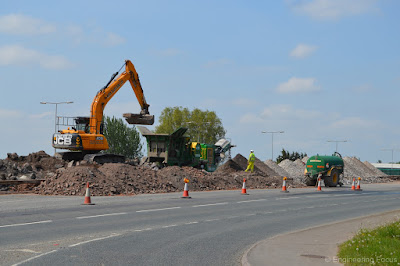 In Runcorn the travelling public will soon benefit from the completion of a major aspect of the project. Work has been underway for the past 11 months to remodel the roundabout which connects the A557 to the M56. This roundabout has been upgraded from a flat roundabout controlled by part timed traffic lights to a 'throughabout' with permanent traffic light control.

The throughabout or 'hamburger roundabout' will allow some traffic to drive through the middle of the roundabout under traffic light control, whilst other traffic navigates the roundabout itself. The new junction with extra approach lanes should vastly increase capacity and cut waiting times without the need to build an expensive grade separated junction.

It should come as relief to many who use the junction frequently that work, at this junction at least should be complete within the next week.

The images below show the progress on the new throughabout. Road markings have already been painted and large parts of the junction have already had the final road surface applied. 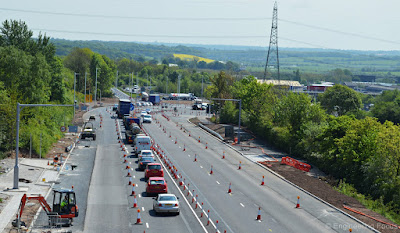 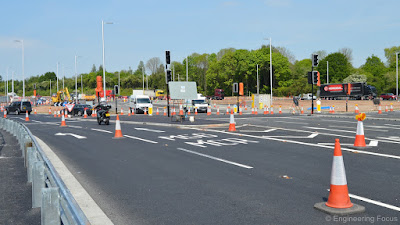 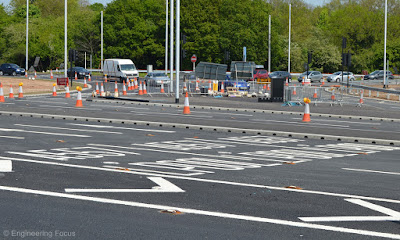 When most people picture Chester they usually think of the famous clock, the "Roman" walls or the Tudor/Mock Tudor buildings. It's true to say Chester has a rich past which helps to attract tens of thousands of tourists and it's more laid back feel, combined with leading high street stores attracts many tens of thousands of shoppers each year. 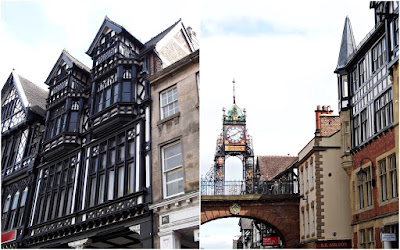 However in Chester's recent past there have been some architectural misses which have spoiled the look and feel of some corners of the city.

The first purpose built market was constructed in Chester next to the Town Hall in 1826, and as with most buildings had evolved over the decades. However in 1970 what has been described as "civic vandalism of the worst kind"(1) commenced with the demolition of the existing building to make way for the modern brutalist concrete structure we see today.

The rear of the Town hall is now lost in a sea of angular concrete and brick structures which do not fit all all with the hall which opened in 1869 and built in the Gothic Revival style. A Striking photo of the building which once stood next to the Town Hall shows what had been lost. 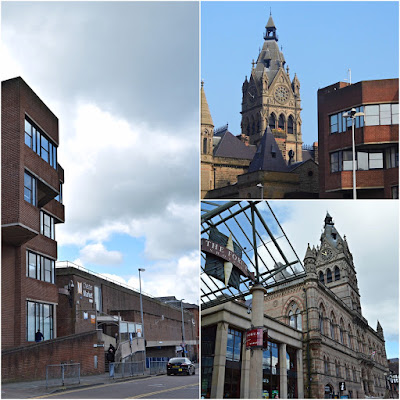 Fortunately however the days of the existing market hall may be numbered, as the council has now put forward plans to redevelop this corner of the city.  In fact if it were not for the financial crisis of 2008 the market hall would have already given way to a new development which would have included a retail units, apartments, extended hotel and large department store.

The new proposals which have been developed by Cheshire West and Chester council are smaller in scale to the original plans for a £800m privately financed development. However it will still included key elements of the original proposal and will transform this part of the city.

The new development will use the land which is currently used as the main city centre bus station, as well as the market and Forum Shopping Centre. 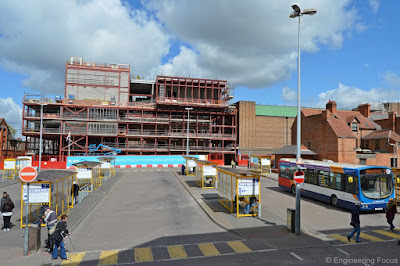 The Cinema in the background of the image is already undergoing a transformation. It was always to be included in the plan, however has sat empty since 2007. The 1930s brick art deco building which is Grade 2 listed will be transformed into a cultural centre.

The existing brick building is being fully restored whist a new modern extension is being constructed that should hopefully compliment the existing structure. The new cultural centre will house a 800-500 seat theatre, library spaces, café and a boutique cinema 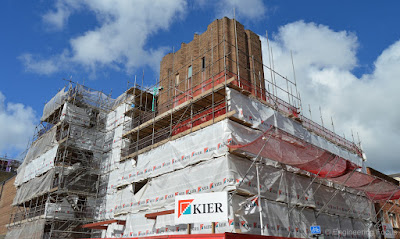 In order to facilitate the construction of the new development a new bus station is already being built on the site of former Gorse Stacks car park. The new curved bus station will provide passengers with a fully enclosed waiting area which will be a vast improvement over the collection of inadequate shelters which makes up the current interchange. 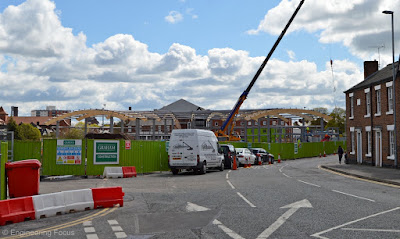 It appears that developers have learned from the past and are now designing buildings that whilst appear modern fit contextually within their surroundings.

We'll be watching the development closely and will provide updates as soon as construction starts.