2017 feels like and important year for the rail industry with the go ahead given to construct HS2 between London and the West Midland and the start of the procurement process for the trains that will eventually run at speeds of up to 360km/h between between Birmingham and London from 2026.

It is clear that most of the biggest train builders are vying for the valuable £2·75bn contract to build the trains for phase 1, not just for the monetary value but also for the prestige of building what will become iconic trains within the UK.

Alstom was keen to highlight the fact that they already play a key roll within the UK rail industry and employ 3200 people in the UK. Alstom was also keen to demonstrate innovations such the tilting class 390 Pendolino which cut journey times on the WCML and the trainscanner technology being used to inspect and spot potential problems with the Pendolinos that Alstom maintains.

Alstom has installed 2 Trainscannes in the UK which can detect problems that may occur with the Pendolino fleet. 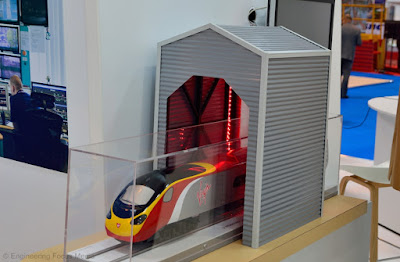 Alstom is not the only contender who can claim to have a UK workforce and provide innovative solutions. Hitachi who are a relative newcomer to the UK rail market already employ 1000 people within the UK and are themselves introducing innovations to the UK rail network.


In the coming years Hitachi's AT300 or class 800/01/02's will soon be a common sight on the East Coast and Great Western lines and Transpennine Express routes. The 800 and 802 units will be able to operate under electric power from 25kv overhead lines, but crucially will also be able to operate on non-electrified routes thanks to the powerful MTU diesel engines that will be installed underneath the carriages.

Keen to highlight their reputation as a "key player in the development of the Shinkansen", Hitachi had what it is calling "the British bullet train" on display which is aimed squarely at HS2.

Model of the AT400 "British bullet train" on display 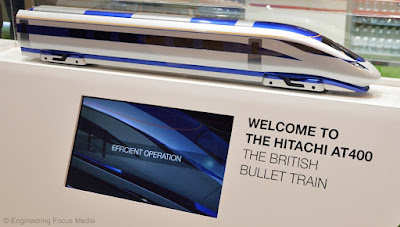 Chinese CRRC Corporation had yet again brought it's own delegation to the UK with a wide array of rail vehicles on display, it is clear they are keen to enter the UK rail market. Although they have not yet sold any trains to the UK, I wouldn't rule them out for HS2, CRRC has experience building 380km/h trains for the extensive Chinese high-speed network. 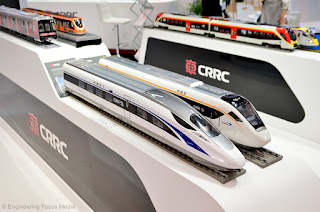 In non-HS2 related news, another relative newcomer the the UK rail market, Stadler had a number of trains on display, some that are already on test within the UK and others that we will soon see arriving into the UK.

As someone who frequently uses Merseyrail network I was excited to take a look at the new trains that will replace the ageing class 507/8 fleet. The new EMUs designed specifically for the Merseyrail network will provide step free access (a first for the UK classic network) and will be able to carry more passengers. The trains will also be lighter, more energy efficient and importantly more reliable.

As well as providing 52 new trains Stadler will also be upgrading and refurbishing the maintenance facilities at Kirkdale and Birkenhead North.

Stadler will also be providing 378 carriages for Abellio East Anglia based on the FLIRT multiple unit. The order includes 38 bi-mode units which will be able to operate on non-electrified lines. 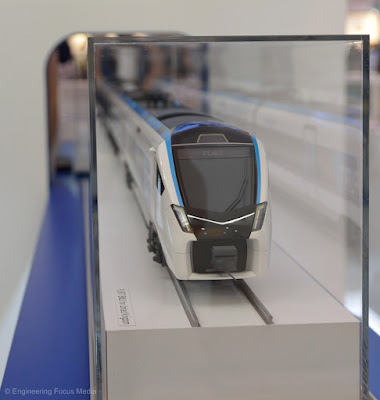 The fact that a number of train builders are now keen to show what they can bring to the UK rail market shows that there is confidence in the UK that wasn't there perhaps 3 or 4 years ago. There are challenges ahead, especially surrounding the delayed electrification programme, but companies are willing to invest in solutions to meet those challenges.

I am looking forward to getting a chance to ride and documenting the many new trains which will be coming to the UK over the next 5 years.