On the 3rd of August (2015) one of the largest TBMs (tunnel boring machines) ever built in Britain began it's journey through the Manchester bound Farnworth tunnel. Over the next few months the TBM which has been named Fillie will re-bore the tunnel to increase its diameter.


The reconstructed tunnel will replace 2 single track tunnels with a single larger twin track tunnel, which will allow for the electrification of the line between Manchester and Preston via Bolton. The widening of the tunnel will also allow for faster line speeds, with the speed of the line being increased to 100mph. The project forms part of phase 4 of wider £300m North West Electrification Programme which will electrify the lines between Liverpool - Manchester - Preston and Blackpool.


Before work could commence to widen the bore, it first had to be filled with 7500 cubic metres of foam concrete and a 20m long "launch pit" had to be constructed. The foam concrete will help to stabilise the existing tunnel lining and ground around the tunnel as the machine advances.

Due to the irregular material to be excavated, the team behind the project opted to use what is known as an 'open face' tunnel boring machine, which unlike the TMBs used for projects such as Crossrail, does not have a large single rotating cutter head. Instead the machine employs 2 independently controlled excavators each with a reach of over 4m, the excavators can be fitted with either a shovel like device or a rotating tungsten carbide cutter, depending on the material being excavated. The excavators are housed within the large 9m diameter shield to protect the workers and machinery.


Like a conventional TBM it uses hydraulic rams at the rear of the machine to inch itself forward as material is excavate. As the machine progresses forward workers will install concrete segments which will form the new tunnel lining, in all 1900 concrete sections will be installed to form the reconstructed tunnel.


Whilst work continues to widen the Manchester bound tunnel passenger services will continue to operate using the smaller Preston bound tunnel, with a reduced service operating Monday to Friday. The single track tunnel will be used for trains running in both directions with a speed limit of 15mph until the reconstructed tunnel opens. 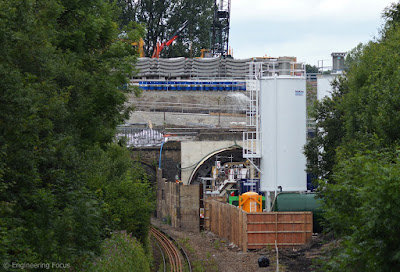 Northern Rail 156 about to enter the Preston bound tunnel. 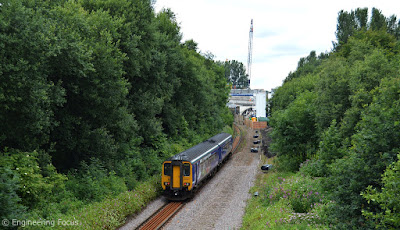 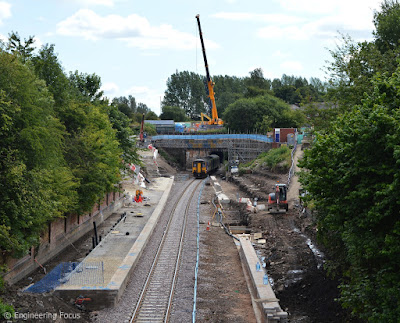 A new access road has been built off the A666 to remove 120 lorry movements a day from residential streets. Fillie will be working to re-bore the tunnel beneath. 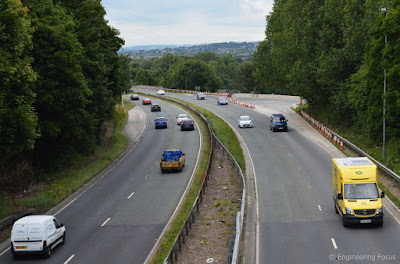 Posted by Engineering Focus at 11:11