In 2016 it appeared as if the redevelopment of Chester's Northgate quarter was finally going to get underway, after years in the planning, false starts, and a number of major re-designs. The redevelopment of the area was originally supposed to begin in 2010, but the financial crisis saw funding withdrawn, which lead the company behind the plans to revise the proposal in order to reduce the scale and therefore the cost of the development.

However Cheshire West and Chester Council and the developer were unable to agree on a way forward, therefore the authority took the decision to develop it's own plans and to seek ways in which it could fund any future development itself. 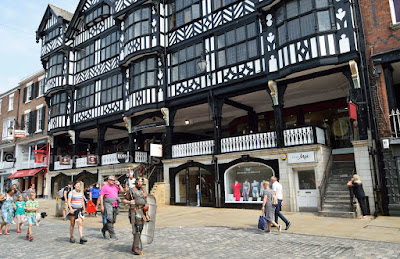 The image above is probably what most people imagine when picturing Chester, black and white mock Tudor rows, complete with Roman Centurion.

Cheshire West and Chester Council continued to develop and redraw plans over a number of years as shopping habits changed and high streets across the country continued to struggle. The original plans put forward included a large department store and were much large in scale. However, the final plans look much smaller in scale and will not include any new shops. The emphasis has instead been on providing a new indoor market space, new 6 screen cinema and a new multi-story car park. The new car park will not however lead to a net increase in city centre parking, as Trinity St and Market St car parks will eventually be closed and demolished in the future to make way for the next phase of the development.

The reduced scale of the development is highlighted by the expected cost for phase 1, which is estimated to be just £72m. Compared to the cost of the original 2010 redevelopment which had a budget of £460m. Unlike the original proposals which were drawn up by a private developer, the cost for the new proposal will be borne by the local authority. The development website states the development will be funded on a "traditional public sector ‘payback’ basis which will ensure that the capital expenditure is written down over a period of 25 years and is factored into the Council’s annual budget"

Part of the development site, with the modern extension to the Storyhouse pictured to the left in the background.

The original proposals which were much larger in scope would have encompassed the old bus station, market building, Forum shopping centre and Crowne Plaza hotel. Whereas the proposals for phase 1 only include the site of the old bus station. A decision is yet to be made on the future of the existing market building and Forum shopping centre, but CWaC says that plans will be drawn up in late 2020 and that work cannot begin on the existing market hall until the new one is complete.

The proposals for phase 1 may be modest in comparison to the original plans, but they still have the potential to transform the area, which for a long time has been neglected. This despite the site sitting within the heart of the city, close to Chester Cathedral and behind the striking Town hall which was built in the Gothic Revival style in 1869. The site is also next to the grade II listed building which now houses the Storyhouse, which is an art deco brick building, built in 1930s, albeit with a modern, but complementary extension. The terracotta façade which formed the entrance to the former library is also grade II listed. 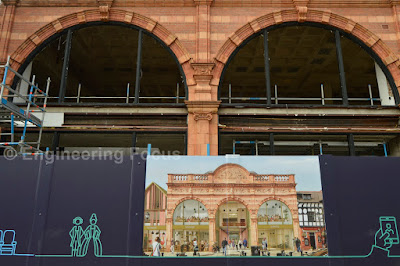 The Grade II listed facade of the former library, which will act as the entrance to the new inclosed market

Thankfully the face of the former library will be retained and will in fact form a key part of the development. The main structure of the building will be largely removed, it had no architectural merit and was a relatively recent development. The faced itself however will serve as a striking entrance to the new indoor market and cinema leading people through into a new modern development. One which the authority hopes will sit well within its surroundings, unlike the concrete and brick building which currently sits at the rear of the town hall and houses the existing market. 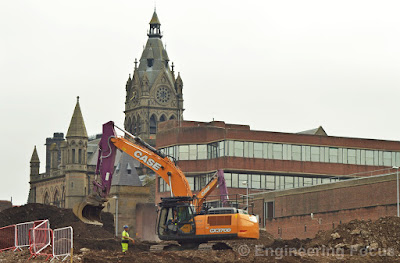 The image above shows work taking place to clear the site, in the distance is the clock tower of the Town hall and to the far right, part of the building which houses the existing market.


Work on the Northgate development officially got underway in June 2020, when a modest socially distanced sod-cutting ceremony was held. The main contractor Vinci Construction has now taken possession of the site which is currently in the process of being cleared. The steel and glass bus shelters have already been removed so there was little in the way of demolition required. But that still left the not unsubstantial job of clearing the huge brick paved area which formed the old bus station. A small amount of careful deconstruction is also taking place to remove the building which housed the former library, whilst keeping the facade intact.


As well as site clearance, work is also underway to redirect utilities and to construct a new drainage tunnel. In addition, archaeological work is also taking place, with several Roman artifacts already discovered. Work is also taking place on the A5628 St Martin's way to remodel the junction, with Hunters St now closed to traffic. Eventually, a new junction will be constructed to replace the existing Sens Cl junction which will connect to the new Hunters St alignment, leading to Northgate St.

The dual carriageway has temporarily been reduced from 4 lanes to just 2, which is causing congestion, this despite the overall reduction in traffic volume brought about by Covid-19. With work expected to take until Summer 2021 to complete, and schools set to re-open in September it is possible that congestion could start to become more of an issue over the next few months. It's probably advisable to avoid that section of the A5628 all together if possible.

Whilst the upheaval will undoubtedly be frustrating for motorists and local residents, it will only be temporary, it is hoped, transform a large part of the city centre, helping the city to attract more visitors and secure the future for the city's independent market traders.

There is a video on Youtube which shows the scale and the development and progress on site clearance as of August 2020. [see below]

Posted by Engineering Focus at 11:53