In the first part of my Rail Live special I looked at some of the rolling stock that was on display, but primarily the event is intended to bring together a wide variety of railway infrastructure and service providers from across the sector, from specially designed rail plant to railway specific services.

One of the first stands I visited was that of FLOW Bridge, this innovative curved, modular bridge has been developed by Network Rail to provide a cost-effective and visually striking alternative to traditional foot crossings.

The bridge was developed in just 11 months and is made out of lightweight fibre-reinforced polymer (FRP), which at 20 tonnes is half the weight of an equivalent steel or concrete bridge. 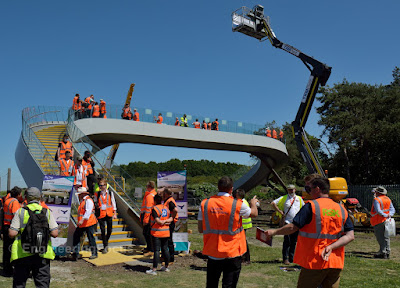 The bridge is very much still in the development phase with work continuing to develop a fully accessible version, but it is hoped that bridges based on this design could be used as a cost-effective way for Network Rail to eliminate level (foot) crossings. It is estimated that FLOW could be delivered for just half the cost of a steel or concrete bridge.

Not only is the bridge visually striking but it also has some clever features which set it apart from other bridges. One feature is the concrete-less foundation, which could save on cost and Co2. The bridge instead uses a steel pad (the only steel used in the whole structure), to spread the load of the bridge.

People have commented that this isn't the first polymer-based bridge, but I think what makes this different is how it looks. Steel and concrete bridges often look unattractive and out of place within their surroundings, whereas I think this bridge looks attractive and could be adapted to fit within rural or urban environments and would be an asset to a community rather than just a functional amenity. It will be interesting to see what the ramp version looks like, as current ramp designs often look oversized and out of place.

The day before the event Nigel Harris tweeted an image of a giant piece of equipment which piqued my interest. I had a vague idea of what could it be, but wanted to check it out for myself to see what it was.

It turned out to be an enormous wood chipper, but not an ordinary wood chipper. This 500hp beast is powered by an engine from a Scania truck mounted on John Deere 1510 E foresty forwarder, the largest forwarder John Deere manufactures.

Whilst the mammoth machine wasn't designed specifically with rail in mind it is currently being used during the construction of HS2 and can be used to clear vegetation from railway sites. The chipper itself can chip trees up to 85cm in diameter, with the chips fed into a 28m³ bin. Once full the harvester can be driven to a nearby access road to discharge the chips into a waiting high-volume walking floor biomass trailer. To discharge the chips the entire bin is lifted to the height of the top of the trailer and then tips the entire 28m³ contents directly into the trailer.

Chipping trees or vegetation on-site or directly onto railway embankments is becoming less of a common practice nowadays for several reasons. For one, wood chips are an increasingly valuable commodity, the representative from Coombes was keen to say that the chips don't simply go to waste, they can be sent off to the energy industry, to power stations such as Drax, or to the wood processing industry. Another reason why it's no longer desirable to chip onto embankments in particular, is because wood chips can make embankments unstable and as they rot down can encourage further vegetation growth.

The representative from Coombes was also keen to stress that they're not just aimlessly cutting down trees and that a lot of planning has gone into deciding which trees to cut down. Coombes have their own team of ecologists to ensure that they're following all current guidelines and laws designed to protect wildlife. Unfortunately, it's simply a fact that to build any new infrastructure such as a new railway or road, that some trees will have to cut down. I know that felling to make way for HS2 has caused a lot of anger which is being targeted at HS2 contractors, I also know that misinformation is playing a big part in that anger. But it should be pointed out that HS2 Ltd and contractors working on HS2 are going to great lengths to ensure that they're removing trees and vegetation only where necessary.

QTS Group also had a range of specially designed vegetation management equipment on display. The QTS range is designed more with trackside vegetation clearance in mind and the company has a wide range of road-rail vehicles at its disposal. Equipment such as the 460hp "Mega Chipper" which can chip trees up to 60cm in diameter. The chipper can propel itself overground on caterpillar tracks or rail via hydrostatically driven rail wheels.

If it's not possible to chip on the railway then QTS can use its one of a kind rail-mounted vegetation compactor to remove material for disposal off-site. The compactor is designed to work alongside one of their Liebherr road-rail excavators fitted with a tree shear. The trailer can hold up to 10 times the volume of a traditional trailer providing substantial efficiency savings. Also, the Liebherr RR-excavator and compactor only requires a 2 person crew which increases safety and productivity.

Working on the UK's rail network is becoming increasingly challenging, especially in urban areas where space may be at a premium or where noise and vehicle emissions may be an issue.

With this in mind, JCB has been leading the way in providing innovative solutions for the movement of materials on site. Pictured below is the JCB ROTO which is a telescopic handler with a difference. It can be used as a standard telehandler with forks to move materials around, working in this mode it has a 2.5-tonne capacity and a reach of 5.5m. But the ROTO is a rotating telehandler which means the body can rotate independently, making the placement of materials much easier in confined spaces. The ROTO can also be fitted with a winch and used as a 5.5-tonne crane with a 20m lift height. In addition, the ROTO can be fitted with a remote-controlled access platform, which means workers can take control of the ROTO from within the platform. 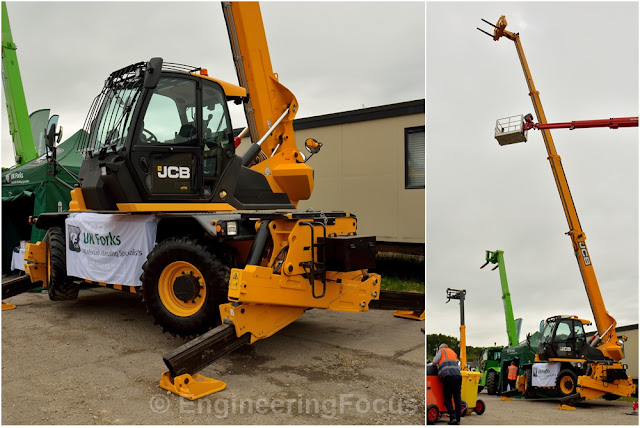 JCB also has solutions if noise or emissions are an issue and is leading the way when it comes to battery-powered equipment. Also on display at the VP plc stand was a JCB 525-60E, which is a compact electric telehandler. The 525-60E has a 2.5-tonne lifting capacity with a lift height of 6m. It's fitted with a 24kwh battery which can provide a full days operation on a single charge. Being electric makes it perfect for working indoors or in confined spaces. 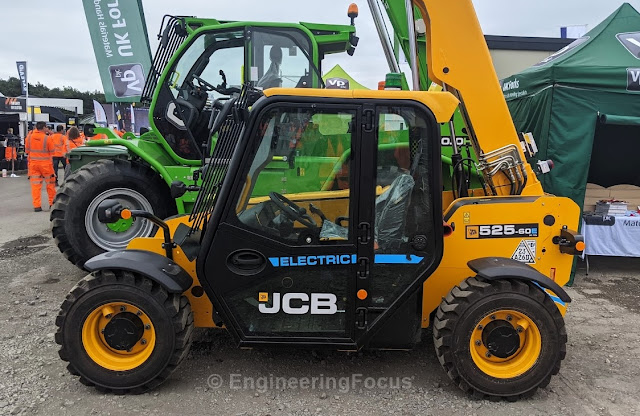 Working to maintain and upgrade the UK's railways may be increasingly challenging, but it's clear from the equipment and services on display at Rail Live 2021 that companies are always looking for innovative solutions meet those challenges.