It has been almost a year since I first wrote about the Ordsall Chord project which once complete will connect Manchester Victoria and Piccadilly stations for the first time.

Tuesday (21st Feb) was a particularly important day as the steel arch which will carry part of the chord over the River Irwell was lifted into place. There were plenty of press and media in the area to report on this key milestone.

The lift of the 600 tonne arch began at around 5am (21st Feb), it was expected that the lift would commence later however the weather reports coming in showed high winds for later on in the day. 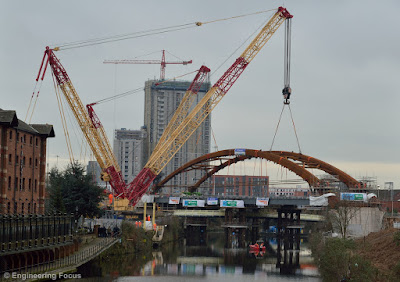 The lift viewed from Irwell Street

The lift required 2 Liebherr crawler cranes, the smaller of which is rated at 750 tonnes, the other which is also the biggest movable crane in the country is rated at 1350 tonnes.

By 10am the arch had been lifted into position over the bridge deck however had not been fully lowered into its final position. At one end of the arch (pictured below) engineers were ready to connect the arch to pre-positioned end sections. If you enlarge the picture you can see the gap still remaining through the scaffolding. 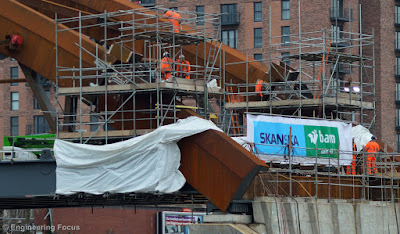 The other end of the arch was ready to be lowered and secured onto spherical bearings which will allow for expansion and contraction. 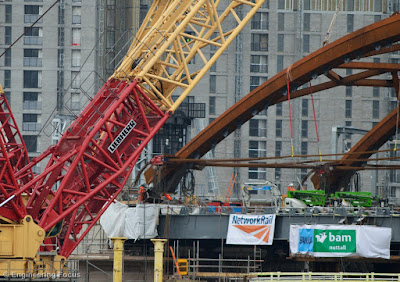 I had hoped to see the final connections being made, however I was informed that lowering the final few inches could take a number of hours as measurements were checked (and re-checked) and engineers prepared to secure the arch.

As the forecast inclement weather rolled in I left with still about 6 inches left to go before the arch would be in its final position. If the engineer I spoke to was correct it may not be fully in place until 10pm. As was the arch finally touched down at around 6pm (21st Feb)

The arch will be secured with temporary bolts to hold it into position, the horizontal tension cables supporting the arch shape will then be released. 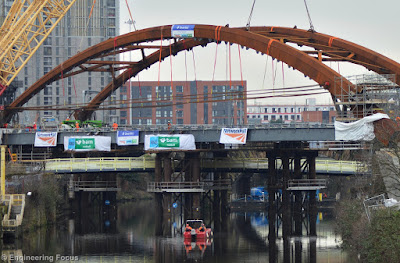 The horizontal tension cables connected to stand jacks were used to hold the arch in shape until it is finally in place and connected. If the cables had not been attached the arch would have flattened out and would not have fit into the gap.

Temporary bolts will support the arch in place for around a month whilst each end of the arch is welded to make the final physical connection. It will also take around a month to attach the hangers which will connect the arch to the bridge deck. Currently the bridge is supported underneath by temporary supports until the arch and bridge are joined.


Network Rail say that the chord will be open in time for services to begin operating in Dec 2017, so hopefully my next report will from one of the first services to cross the chord in late 17. 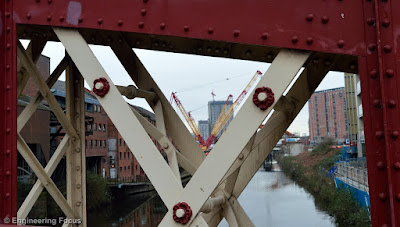 Posted by Engineering Focus at 08:38