We want a faster, more reliable, high capacity railway in the North and "we deserve it" the words of Mike Hulme Co-chair of the Northern Rail Industry Leaders speaking today at the launch of the "Building the North's New Railways" report. I'm certain these words will resonate with any commuters from the North who perhaps looks to South at projects like Crossrail and think, why haven't we got a Crossrail of the North?


As a passionate campaigner and supporter of the railways, but still, somewhat of an outsider, it was fascinating to hear what each of the speakers had to say as to why the North does not yet have its own Crossrail. I came away with a clearer understanding of the challenges facing the industry which could act to stifle investment in transport in the North, but also a sense that we are at the cusp of a seismic shift in the future of the railways right across the North. 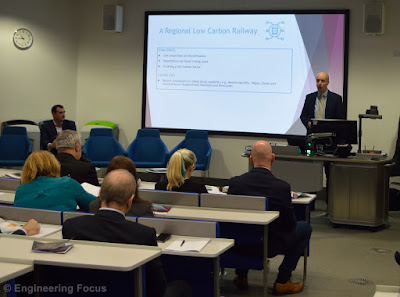 
But first I want to skip to the very end of the conference, I was the guy sitting at the back who asked the awkward question, a straightforward question I thought about improvements to the Oxford Rd to Manchester Piccadilly corridor, which as far as I knew was up until fairly recently a shovel ready project which was almost about to begin. My two-part question, was "what has happened to the project" and "are they starting from scratch?" with regards to design and funding of the project, which at one stage formed the backbone of what was called Northern Hub. Admittedly possibly a question for another time, however, I asked the question, the room fell silent breifly, but I did get answer of sorts (no disrespect to Mr. Wood who did answer) but he said that the area in question is particularly challenging, with high-frequency passenger services mixed with slow-moving freight trains powered sometimes by diesel, sometime electric, which means that untangling the corridor is not straight forward, adding we will know more in the summer...

Why bring this up? One, my own curiosity, but also to get a sense of where Transport for the North is up to with regards to investment and unblocking a bottleneck at a key part of the East-West railway network. The answer I got though did underline one of the challenges facing the North as a whole, the East-West corridor is extremely congested, it serves, local, regional, intercity and freight services all competing for only a finite number of train paths. It would seem then that providing greater capacity and reduced journey time is a monumental challenge. But a challenge TfN and those within the industry are willing to take on in order to unlock a potential prize of £100bn worth of economic benefits by 2050. 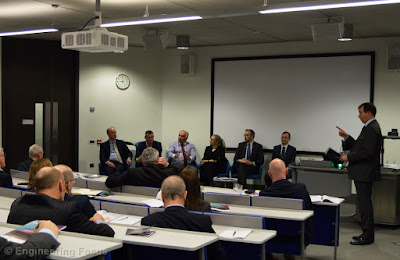 Q and A  panel from left to  right
The focus of the report however, wasn't directly about the technical challenges or what Northern Power House Rail will look like, it was about something often overlooked and something which as it turns out could potentially be a greater hurdle than the engineering changelings that lay ahead. Northern Powerhouse Rail Director Tim Wood said something that is crucial for future of rail investment in the North; that the Treasury will not release funds if TfN cannot prove that there is the skilled workforce in place to undertake the improvements that are being proposed.

When people talk about investment, they usually talk about how much a project will cost or how the Government should invest more in the North. What I took from the speaker's comments is that Government is willing to invest but there is a massive skills shortage facing the industry and it is up to the industry to train the skilled engineers required to undertake such a massive undertaking as connecting East and West with a fast, high frequency rail network

In response the industry via this report seems to be saying that they need a steady stream of work so that they can be confident enough to invest in training the thousands of workers needed, not just engineers on the ground but, architects, project managers and procurement professionals, to name but a few. Not only that the but also to invest in new technologies that will be required to help deliver additional capacity, better customer interfaces and help to deliver projects on time and on budget.

This potentially could leave the industry, TfN and Government at an impasse with neither the Treasury or industry willing to budge. However, and now comes the good news, the industry has taken up the challenge and in the words of Mark Hulme, "today is a call to arms". A call from the 8 companies who helped produced the report to the industry, from SMEs and large companies to Universities and government bodies, on how the industry as a whole can overcome the shortages of skilled men and woman and how they can use technology and big data to improve efficiency.

Throughout the report and today's talks there was a common theme, that the industry needs a smooth and stable pipeline of work, with a working figure of between £2b and £3bn each year over 30 years. But also crucially that industry if willing to change, modernise and train the skilled workforce needed in order to deliver a transformation upgrade of railways across the North.


It's worth mentioning not once did I hear the phrase we need HS3 (Northern Powerhouse Rail) instead of HS2, it's clear to business leaders and the rail industry in the North that we need both. In the words of Tim Wood "we need HS2 and we need East West capacity as well, it is about capacity not just speed"


In the next blog I hope to set out key objectives of the report and if there are any clues as to what a new Northern Powerhouse East-West railway might look like.


One last quote to finish on, which gives a good sense of the mood within the industry in the North currently; "Northern Power House Rail and HS2 are coming and we need to be ready" Tim Wood