The redevelopment of Chester's Northgate quarter has been progressing at pace since my last visit back in August 2020, with several new structures already starting to taking shape.

A 250 tonne crane has been on site for a number of weeks helping to install pre-cast concrete panels and steelwork. A large concrete core has already been constructed using concrete panels, this will house the stairwell and lift shafts for the multi-story car park. The structure of car park itself like the other buildings is being built out of steel.

Concrete core being constructed for the multi-story car park 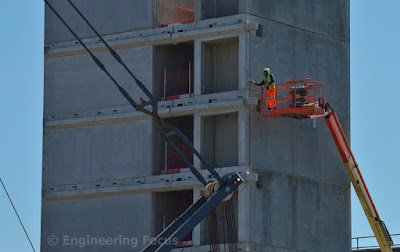 One of the larger buildings which is already taking shape is the new cinema. The image below shows the steel framework which forms what will become the cinema, it also shows a stepped concrete structure which is where cinema-goers will eventually sit. 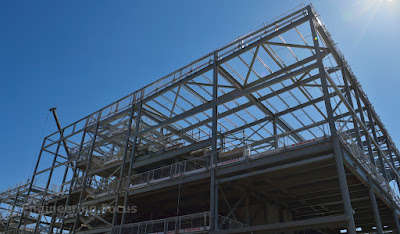 The multi-use space which is being constructed directly behind the old library is also starting to take shape. Its multiple roof spans appear to be an attempt to mirror the local architecture so that the building fits in with the surroundings.

Structure being built behind library 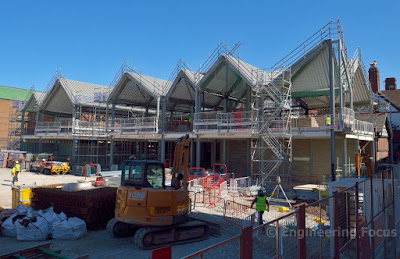 Whilst work continues on the Northgate redevelopment another large construction project is also underway. If you live or work in Chester then you have probably already felt the impact of this work, as it has forced the closure of 2 lanes of St Martin's Way and Nicholas St, resulting in Chester's ring road being turned in effect, into a giant roundabout. This is because St Martin's Way and Nicholas St are currently closed in the southbound direction from Fountains Roundabout to Grosvenor Roundabout. The local authority decided that this would be the best solution for dealing with traffic, rather than just having a single lane in each direction from Fountains Roundabout to Grosvenor Roundabout

The works themselves are part of the wider Northgate redevelopment and will help to future proof the Northgate quarter against flooding and "drain bursts". The works involve building a 1km long tunnel underneath St Martin's Way, Nicholas Street, Grosvenor Road and Castle Drive, then out to the River Dee. The new drain which will have sections up to 1.2m wide will help direct rainwater away from the Northgate Quarter and the sewer system so that it isn't overwhelmed during heavy rain. 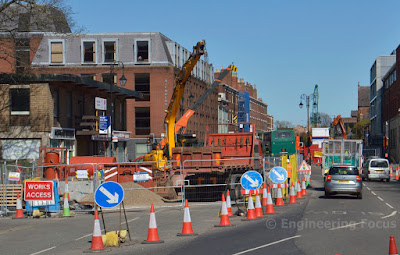 The main contractor VINCI Construction is using 2 TBMs (tunnel boring machines) to construct 85% of the tunnels via a "pipe jacking" method. The remaining 15% will be constructed using a more conventional surface excavation method.

The 2 TBMs, one which is 1.2m in diameter the other 1m in diameter will bore the tunnels underneath St Martin's Way, Nicholas Street, Grosvenor Road and Castle Drive. As the TBMs progress forward sections of concrete pipe will be pushed in from behind using hydraulic rams to form the new drainage tunnel. 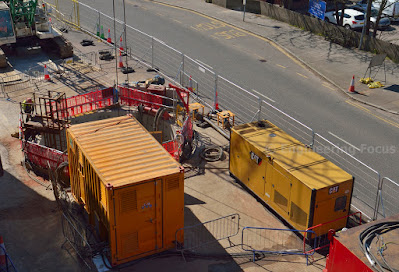 The TBMs are using a "closed slurry system" to remove waste material from the tunnel. Water is pumped to a TBM and is mixed with waste material to form a slurry which is then pumped back to the surface. Once at the surface the slurry is filtered on-site to seperate soil and rocks from the water, once seperated the water is sent back down to the TBM for re-use.

The slurry filtering system which separates waste material from the water 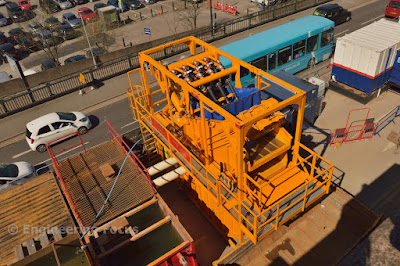 The drainage works which started in November 2020 are estimated to be completed by November this year. I'm sure the completion of the work will come as a relief to many who live and work in Chester, undoubtedly as Covid restrictions begin to ease traffic levels will begin to increase in and around Chester, so it is vital are completed on schedule.

If you would like to know more about the Northgate redevelopment check out my earlier post from my first visit in August 2020.

Short video clip showing the extent of progress so far

Posted by Engineering Focus at 09:00