The Merseyrail network currently consists of 75 miles of railway, 6.5 miles of which are underground, split between 2 lines serving a total of 68 stations. The line is electrified by means of 750v DC third-rail and is served by 56 Class 507 and 508 EMUs, however, these units are due to be replaced by new, Class 777 trains over the next couple of years.

Prior to the outbreak of Covid 19 the network carried 110,000 passengers per day and Central Station where the Wirral Line intersects with the Northern Line was the second busiest station in the North West with over 14 million entries and exits between 2018-2019.

Current extent of the Merseyrail network

Rail maps on Redbubble, available on mugs, prints and much more

The network also has a number of other stations which have connections to the national rail network. They include Liverpool Lime St, Liverpool South Parkway, and Bidston where passengers can join Wrexham-Bidston line services.

Outgoing Class 507/8s are due to be replaced by Class 777s over the next couple of years. 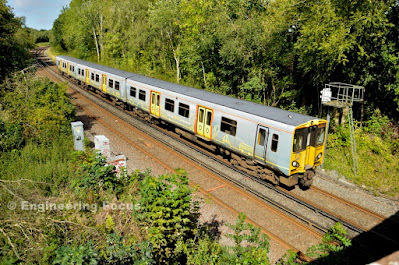 When compared to 25kv overhead electrification, 750v DC third-rail is less efficient, more expensive to install and maintain, and with a live conductor rail at ground level is also more dangerous. Having said that, in terms of efficiency, third-rail electrification is still vastly more efficent than diesel traction.

Taking this into account you could be forgiven for thinking it is unlikely that the Merseyrail network will be expanded in future and that services are destined to remain limited to third-rail lines. However, there is some good news on the horizon and Merseytravel which is the strategic transport advisor to the Liverpool City Region is certainly not content with terminating services at the current stations.

The Class 777 units being delivered to Merseyrail are set to provide serious opportunities for expansion beyond the third-rail network and Merseytravel is working with the train manufacture Stadler to investigate technologies that would allow just that. Firstly, units on which Class 777 are based can be constructed with a pantograph and transformer to take power from 25kv overhead wires. Or could be fitted with batteries, and in fact, one of the Class 777s which is being delivered to Merseyrail will be fitted with batteries and trialled on the Merseyrail Network.

Update. The first Class 777 fitted with batteries, 777 002 arrived in the UK last week and was spotted in Crewe on the 5th of May.

Merseytravel plans to test how well the battery-powered Class 777 can perform, initially limited to operating on the third-rail network to provide a fail-safe should the batteries fail. However, Merseytravel will be able to put the battery-powered unit to the test across the Merseyrail network. Particular attention will likely be paid to how the unit performs on the steep incline on either side of the tunnel underneath the Mersey. The standard Class 777 units will have much better acceleration characteristics when compared to the outgoing Class 507/8s, so much so, when all Class 777s are in service the timetable will be sped up. This will allow Merseyrail to provide the same level of service (pre Covid19) with fewer vehicles, the order for new units stands at 52, compared to the current 56 units. For the battery trail to be successful the unit must perform comparably under all conditions to the Class 777s which are not fitted with batteries. 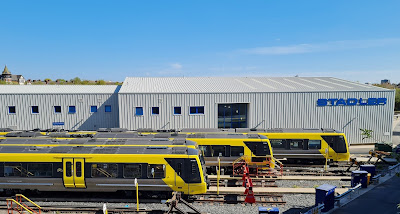 Merseytravel isn't paying lip service to future expansion with this trial, they have serious ambitions to extend the network and are already working on plans for an initial modest extension from Kirkby to a new station to be constructed at Headbolt Lane, but they have more ambitious plans to extend services to Skelmersdale, which would require reinstating a former route which was closed in the 1960s and the construction of a new station. Plans for Skelmersdale link are currently at the GRIP 3 stage. The new Headbolt Lane station would become the new eastern terminus on the Kirkby branch, until such time that services can be extended further. The new station would require a short section of third-rail from Kirkby, although if the battery trial is successful the new station could instead be served by Class 777s fitted with batteries.

Merseytravel also has a long term goal to extend services from Ellesmere Port to Helsby or Warrington Bank Quay, they would also like to extend services from Ormskirk to Preston and from Bidston to Wrexham. In order to ensure that any further extensions can become a reality Merseytravel has an option to purchase a further 60 units from Stadler, should the need arise. These units could be fitted with either pantographs or batteries, depending on how further extensions are to be delivered.

Electrification of the Wrexham-Bidston line was discounted back in 2008 when Network Rail published a report which estimated the cost of electrifying 27 miles of railway with 750v DC third-rail to be £207m, a figure which was said to be 3 times higher than that estimated by Merseytravel. This meant that it seemed as if through services to Liverpool from Wrexham would be put on hold indefinitely. However, the introduction of Class 777s does provide a reason to be optimistic that, in the medium to long term services could operate from Wrexham Central through to Liverpool on the Wrexham-Bidston line.

One option that was investigated was electrifying the Wrexham-Bidston line with 25kv overhead wires, this was thought to be a cheaper option than third-rail electrification, and with the option for Class 777s variants to be constructed to take power from both third-rail and overhead wires, that could have been a real option. However, the publication Network Rail's traction decarbonisation network strategy suggests that the Wrexham-Bidston will not be electrified. The report now suggests that through services will be provided by battery-powered units.

It is likely that if the Class 777 battery trial is a success and proposals for the Wrexham-Bidston line are taken forward, that some infrastructure would be required at the Wrexham end of the line in order to re-charge the units. Vivarail which is currently delivering class 230 hybrid units to Transport for Wales for use on the Wrexham-Bidston line, has been working on battery technology for some time and they say one of their units fitted with batteries could travel as far as 60 miles on a single charge. 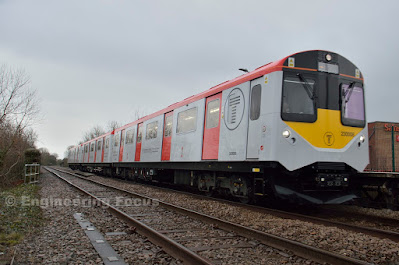 If we assume that a Stadler unit could be fitted with enough batteries to travel up 60 miles between charge, whilst maintaining the same acceleration characteristics as the non-battery variants, it is still thought that the 54 mile round trip from Bidston to Wrexham and back on one charge would be difficult. This is due to the steep gradients on the route from Shotton towards Buckley and the frequent stops spaced closely together from Shotton to Wrexham Central. Therefore it is likely that a short section of third-rail would have to be installed leading into Wrexham Central.

Rapid charging via third-rail is another area in which Vivarail is leading the way. The system which Vivarail is developing has interim Network Rail approval and is set to become the UK standard system. Their system is capable of providing enough charge in just 8 minutes to power a class 230 battery variant for up to 60 miles. The system uses a short section of third-rail to charge the batteries via third rail shoe gear. This power can either be provided directly from the National Grid, or via stationary second-life batteries, which could be charged more slowly and then used to provide rapid charging to a unit.

Ormskirk to Preston and Ellesmere Port have been classified by Network Rail's report as “multiple (proposed battery)”, which could mean partial electrification with batteries being used to bridge the gap between electrified and non-electrified sections. This raises the question about which means of electrification would be used, as the DfT, Network Rail are against expansion of third-rail. Class 777 variants could only be built to take third-rail and 25kv overhead power, or third-rail and batteries. This is because the batteries would occupy the same space in which the transformers to convert the 25kv AC to 750v DC would. But Merseytravel is also investigating using 750v DC overhead, this means it could potentially be possible to produce units that could draw power from third-rail, overhead 750v DC and also be fitted with batteries.

So, whilst the expansion of the Merseyrail network isn't something that is going to happen in the short term, with new more adaptable units on the way and ever-improving battery technology, it is a real possibility that the network can be expanded in the medium to long term.