The Mersey Gateway opened in October 2017 providing improved links from the M56 and Runcorn across the Mersey to Widnes and on to Liverpool. The £600m project which took 3 years to complete, comprised of a new 6 lane cable-stayed bridge spanning the river Mersey and substantial upgrades to the A553 which runs through Runcorn connecting the M56 to the new bridge.

The new crossing received a mixed reaction from locals and motorists when it first opened, as for the first since the Silver Jubilee Bridge opened, motorists would have to pay to cross the Mersey from Runcorn to Widnes. There were also teething problems with the barrier-less toll system. People complained that signage warning people that they must pay online to use the bridge was poor, this in part lead to almost £20m worth of fines being issued within the first 20 months of operation.

Other problems occurred with people using rental vehicles, who thought they were paying for their crossing, but had in fact paid for crossings made by another person who had previous used the same vehicle.

Many people simply just forgot about the toll and missed the 11:59pm day after deadline, which if you miss generates a £20 fine + £2 toll charge in each direction. This fine increases steeply if you do not pay within 14 days.

Residents who live in Halton can apply for a residents pass, at a cost of £10 per year, which allows for unlimited crossings at no extra charge. And regular users can also create an account online which can be topped up and provides users with as much as a 10% discount for each crossing, depending on if they choose to use the sticker option or not. In December 2019 Emovis Operations which operates the toll system released an app which has made it easier for users to keep track of and pay for crossings. 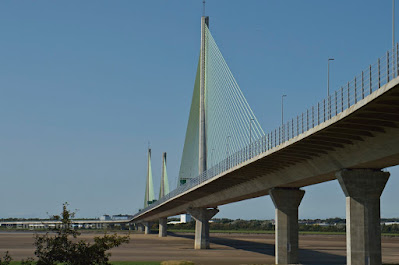 Despite the teething troubles and an ongoing campaign to remove the toll, the bridge had up until the outbreak of Covid19, been a success, carrying 67,000 vehicles each day between October and November 2019. It had also reduced congestion, particularly on A557 Weston Point Expressway, which regularly saw queues of 10 minutes or more.

Even if you do not consider the number of vehicles using the bridge to be a measure of success, the new bridge is a local landmark comparable to the existing and iconic Silver Jubilee Bridge. Its 3 tall concrete pylons support a relatively slender deck via 146 stay cables, and yet, whilst the tallest of the 3 concrete pylons reaches 125m high, the bridge itself manages to compliment rather than overshadow the existing road and rail bridges.

Speaking of the existing bridge, it had reached its design capacity some decades ago and was in need of urgent repairs, this despite recent extensive works to repair the road and deck and repaint the distinctive steel arch structure. The fact is, the bridge simply wasn't designed to carry the volume of traffic which crossed the bridge each day. The original plan was to close the bridge for up to a year once the new crossing had opened to carry out repairs and convert 1 lane in each direction to cycling and pedestrian provision. 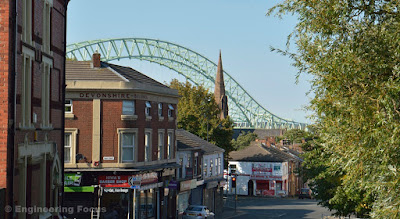 In the end, the Silver Jubilee bridge didn't fully reopen until February 2021. This was, in part due to changes to the proposals made by Halton Borough council. They wanted the bridge to integrate better with the town centre in order to tie in with the redevelopment plans they have. Under the original plans, the bridge would have been accessible by cyclists and pedestrians, but would have been less well connected to the town centre. Road access would have been maintained to the A557 via the existing junction arrangement. Instead, the grade separated junction that connected the A557 to the bridge has been replaced by a single at-grade roundabout. 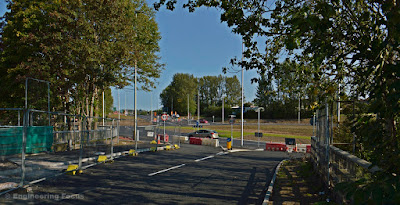 The new roundabout connecting the A557 to the SJ Bridge
The Silver Jubilee Bridge is once again open to vehicle traffic and is now tolled, costing £2 to cross. This arrangement wasn't without its critics, but it does seem to be the only logical approach. Keeping the existing bridge free to motorists would of course encourage people to use the bridge instead of the new crossing, despite the journey time over the existing bridge being much longer, which would have been compounded by increased congestion as people attempted to avoid the tolls.

Video trip across the Mersey Gateway bridge from Widnes along the A533 through Runcorn to the M56.

Speaking as someone who infrequently uses the bridge, it would have been nice if the bridge were free to cross, as it is now nigh on impossible to get from West Cheshire or the Wirral to Liverpool without paying a toll. If you really wanted to avoid paying the toll to use the Mersey Gateway bridge, the only option would be a 10-mile detour via the congested roads of Warrington town centre. To avoid paying £1.80 to use either of the Mersey tunnels would entail a detour of 30 miles.

Having said that, I do appreciate that the £600m project had to be funded somehow, and the government seemed unwilling at the time to fund the construction of a new crossing. This despite tolls being removed from the Severn crossings in 2018 and around the same time the Scottish Government funding a new £1bn bridge across the Firth of Forth, which is also toll-free.

But in the end, a new and in my opinion attractive bridge has been constructed which people in the region will continue to feel the benefits of for years to come.

Want to know more? You can find out about how the bridge was constructed in the series of blogs I wrote as I was following the project. Click here to find out more.

Posted by Engineering Focus at 10:00