I think it's fair to say that for decades Birkenhead has been a town in decline, having once been a very large town with a population of 110,000 and an important hub for shipbuilding. However, by the 1980s shipbuilding had started to decline and by 1993 the last remaining shipbuilder Cammell Laird was forced to close. The name Cammell Laird has since returned to Birkenhead all be it primarily as a ship repairers, although in recent years it has won contracts to build the flight deck for HMS Queen Elizabeth and to build RRS Sir David Attenborough.

Despite the return of shipbuilding to Birkenhead the town has continued to decline. Whilst it does still have a large population, by the 2011 census this had shrunk to 88,000 from a peak of 110,000 in 1901. By any measure, Birkenhead remains a large town, but it has always played second fiddle to Liverpool, both in terms of shipping and commerce. Birkenhead retains a large working dock, but it is nowhere near as big as that of Liverpool. In terms of commerce, in the 1990s the town did see a significant development with the opening of the Pyramids shopping centre and up until recently had a bustling town centre. However, once again Liverpool stole the limelight in terms of shopping, with the massive Liverpool One development which formed part of Liverpool's capital of culture regeneration in 2008. Liverpool One combined with the financial crisis of 2007/08 lead to the decline of the town centre. The global financial crisis also had an impact on housing in the area, with a large number of dilapidated houses demolished prior to 2007, which were supposed to be rebuilt, however, the crisis saw finance withdrawn, which lead to areas of land sitting empty for over a decade.

Since then and with high demand for housing, those empty plots have finally begun to be built upon. However, one of the largest derelict sites in Birkenhead remains the Four Bridges dock area. For years Peel Ports who own the land has talked about regenerating the area with ambitious proposals for skyscrapers to rival those over in Liverpool. However up until now very little has happened, which has lead local people to be sceptical about any proposals. Before now, whenever you read articles about ambitious plans they were usually accompanied by comments such as "we'll believe it when we see it"

Now however, it appears that the first small steps are being taken towards the Wirral Waters development as it's being called. The developments which have begun may seem modest and far from the tall glass skyscrapers promised. However, these are the first steps towards the eventual regeneration of the entire Four Bridges area, which given its size could take decades. But what this could hopefully mean for Birkenhead is a return to population growth, and an increased population will hopefully drive increasing footfall into the town centre. Of course, Liverpool One will always be the big draw for shoppers, even in this post Pandemic era. But hopefully, the recently announced regeneration of Birkenhead's town centre and an increasing population will bring some life back into the town. There won't be a return to the heyday when thousands of people worked in the shipyards and docklands, but perhaps new housing and commercial developments will entice people who currently live on the outskirts of Liverpool to live on the "other side of the water" whilst still being able to commute into Liverpool easily, be it by regular rail service, bus, or even by ferry.

Wirral Waters is the name given to the development of the Four Bridges area as a whole, but in reality it is a long term project that will be split up into many smaller projects. The area is currently a mix of large derelict brownfield sites, active docklands and active light industrial sites. 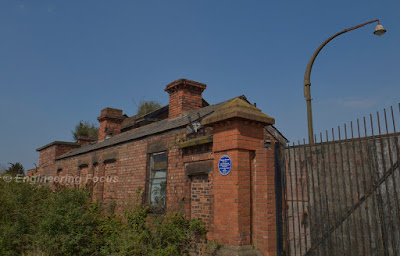 The plaque reads; Thomas Brassey 1805-1870. World's foremost builder of railways in the 19th Century. His Canda Works opened 1853 adjacent to this site.

The initial developments are currently taking place over by the East Float situated alongside Tower Rd and Dock Rd. It is unclear what will become of the active berths, but they are currently still visited by a number of vessels and Peel itself actively promotes its 60,000 sq ft storage facility for steel and metal imports.

A significant step towards transforming Tower Rd started in June 2020 when work began to radically redesign the road layout. The new design aims to reduce the speed of road traffic and provide better facilities for pedestrians and cyclists. 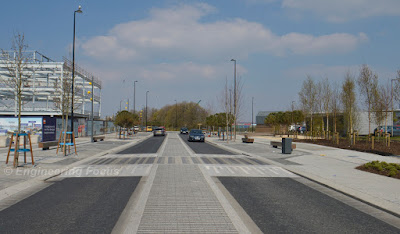 The £3.2m project was designed and delivered in partnership with Peel L&P, whilst the work was carried out by Wirral-based civil engineering contractor, Cambrianway. The project involved widening pavements, installation of new separate walking and cycling routes, new pedestrian crossings facilities and the planting of 130 trees. 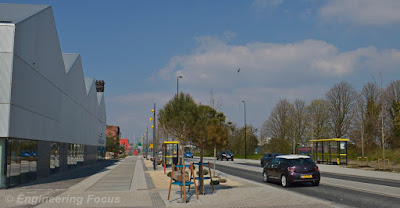 Looking north along Tower Rd, with the recently constructed Wirral Met College building on the left

There was some confusion about part of the new road layout, as an unusual swirl pattern was put onto the road surface, leading people to wonder if it was in fact a roundabout. A spokesperson for the authority said: "Junctions like this one are 'no priority' and do not give one vehicle a right over another nor do they give vehicle drivers priority over people walking and on bikes. "They operate on the basis of all users reducing speed or stopping in order to negotiate the junction safely." 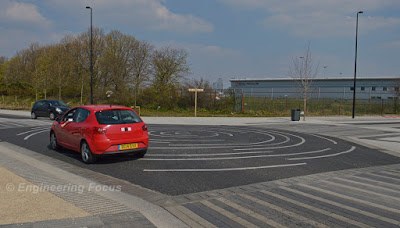 The new 'no priority' junction

I think shared spaces such as this will take some getting used to, especially as currently Tower Rd is a high traffic road, with a mixture of local commuter traffic and heavy vehicles accessing the Twelve Quays terminal from the direction of Birkenhead. But the developers say that as the area is developed and more pedestrians and cyclists take to the street then motorists will begin to take more care and slow down.

It is yet to be seen whether or not the new layout and envisaged greater footfall will reduce the speed of traffic driving through the area, but the project has certainly transformed Tower Rd and made it look like a much more inviting place to walk and cycle.

In December 2020 work started on a new £7.5 development which aims to provide 25,000 sq ft of high-quality flexible office space for local businesses. The building is being constructed alongside Tower Rd which is located on the East Float. 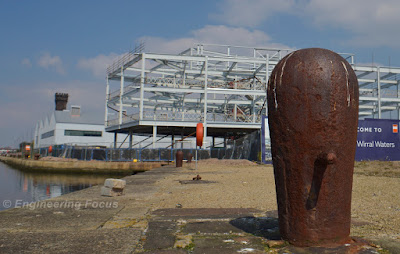 Hythe as it is called, formally known as No1 Tower Road South is due for completion in late 2021. Funding for the new office space was provided by Peel L&P, Liverpool City Region Combined Authority and the Merseyside Pension Fund.

Site clearance for a new 350 home development continued through 2020 and now work has begun on the construction phase. The East Float development is a joint venture between Urban Splash and Peel L&P, which promised to deliver "a brand new waterside neighbourhood on the left bank of the Mersey. With communal open spaces, pedestrianised streets, 1500 trees and soothing open waters" 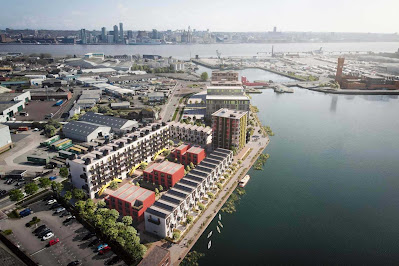 A total of 347 homes will be constructed which will be comprised of three-storey townhouses, row houses and apartments. The developers also say there will be "quiet pedestrianised streets and large communal gardens."

The iconic Grade II-listed Hydraulic Tower is set to be transformed after ambitious plans for £23m Maritime Knowledge Hub was agreed. The new hub will feature a maritime technology centre, space for offshore survival training, a marine simulation and training centre, a hydrobab, 60,000 sq ft of collaborative space and state of the art research and development facilities.

Wirral Council has agreed on a 250-year lease of the building and to invest in its redevelopment to help maintain the momentum of regeneration in the area. The next stage in the development will be to secure detailed planning permission and Listed Building consent before work can start on the site.

Plans for the £4m Egerton Village development were agreed in 2019 however, work has yet to begin. The new space which will be located next to hythe will provide shops and arts and events space, which according to Peel, will be a "creative and community hub for visitors, students, businesses and residents".

The waterside village has been designed by OMI Architects and will be be "modularly constructed", which will provide work experience opportunities for construction students at Wirral Metropolitan College.

The projects described may seem modest by themselves but collectively will transform a large part of the East Float, and will hopefully in time make the area look much more attractive and in doing so encourage more investment in the Four Bridges area. Redeveloping the whole 52 acres site will probably take decades, but these first tentative steps could transform the area and in turn transform the fortunes of Birkenhead as a whole.