Guest blog; Why it's a mistake to reduce HS2's Euston platforms from 11 to 10

HS2’s 10 years of development, modelling and iteration with all engineering functions has been the best ever example of such a process in my experience. Timetable development has fed back into the infrastructure design and the train service specification, and even expanded our overall knowledge of how railways work. The outcome is that every bit of the physical system is necessary to fulfil the train service specification reliably, and the combination of all elements of the system is sufficient to do so.

In the 11-platform hybrid Bill scheme, Euston is not the constraint on HS2, for the simple reason that there is no one binding constraint on the operational capability. The London terminus, the main line headways, the intermediate stations, the junction working and the country-end termini are all in balance. But Euston would become that constraint if reduced to 10 platforms, and so prevent the rest of the system ever working to its full potential.

There is no ‘slack’ in the hybrid Bill scheme. There are however options for absorbing and mitigating delays, and the 11th platform at Euston is one of those – somewhere between a shock-absorber and a crumple zone. To suddenly suppose that the 11th platform can just be dumped, without a hit to either service reliability or service levels, is irrational, just as removing the shock absorbers from a coach to save weight would be, and those proposing the 10 platform solution need to come clean and say which will take the hit.

To illustrate this, take a look at the April 2021 edition of ‘Modern Railways’, where a specimen platform occupation plan for Euston station is given. In its detail, such as train formations, and origins and destinations, it almost certainly won’t be the one applying throughout the life of HS2. But the broad pattern, of 25-minute turnrounds locking together like atoms in a crystal, with just the longest-distance trains taking a double turnround, almost certainly will apply, in the way that the use of parallel moves at Borough Market Junction established by the South Eastern & Chatham Railway in 1922, to maximise use of the network’s most critical asset, could still be seen until the area was remodelled in 1975.

And clearly, in that plan, only 10 platforms are used. But that is just a plan! The question is – do we want to operate the railway like that, 18 trains per hour, 18 hours a day? And the answer is ‘No!’ 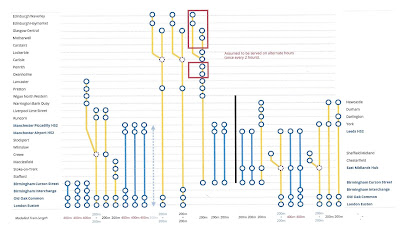 What happens when trains run late? They will, despite our best efforts. Whilst a very high level of reliability can be expected from the Curzon Street shuttles, Manchester and Leeds train will be mixing it with NPR, and about half the specified service actually originates on the conventional network - as it should. The ability to run trains beyond the new infrastructure is a strength of our approach. But it has implications. And trains turning up late at Euston is one of those implications. On pre-Covid PPM, you might expect a train to turn up more than 10 minutes late roughly hourly.

The reoccupation interval between successive trains in the same platform allowed in the timetable is 5 minutes. Technically, it might be done in 4, depending on how well the p/way and signal engineers cooperate. But clearly a late start after a late arrival is very soon going to knock on to the next arrival in the same platform. Even so, Euston as designed for the hybrid Bill has a get-out – as trains alternate between the two sides of the station, and a 200m train can stand between the station pointwork and the King points separating the East and West throats, it’ll be six minutes before a 200m train ‘waiting platform’ delays another arrival. But from then on, it’ll only be another six minutes before the queue is back at Old Oak Common. And note this get out applies only with 200m trains – a 400m train, i.e. half the service at peak times, and probably more as the train service specification evolves, blocks the whole station to further arrivals immediately if it can’t run into its platform straight away.

Where does the 11th platform come in? Simply this – any train arriving more than 10 minutes late can be pointed there instead, and all other trains run as planned. Running into platform 11 is easy, as it is the ‘left hand down’ route that conflicts with nothing else; running out means finding a path amongst everything else, so you have to choose your moment carefully. Clearly if two trains in quick succession turn up more than 10 minutes late, the second has a problem, and here the more drastic option of terminating short at Old Oak Common and restarting from there comes into play. That is possible, but no easy matter – passengers have to be forwarded either by Crossrail which isn’t too good for those with heavy luggage, or on the next HS2 to Euston, which plays havoc with the dwell time. Unless the train crew are working back on the same set, their diagrams and breaks will be disrupted. And passengers for the departure have to be shipped to Old Oak, which means anyone turning up at Euston less than about 6 minutes before time will probably miss it.

And the point is this – without the 11th platform, when a train presents more than 10 minutes late, the choice will be either extensive knock-on delay at Euston, or terminating it at Old Oak. How often do you think the latter is acceptable? Hourly? Daily? Weekly?

And let’s be clear about one thing. It’s not the high speed plain line that will have the problems with late presentations. The feasible headway even at 360 kph is between 2 and 2.5 minutes. So there is between 1 and 0.5 minutes buffer (not ‘slack’, please) between trains, and even if a train turns up out of course and squeezes in, the resultant delay will decay over the next 5 or 6 trains at worst. That’s even before considering that 360 kph is just a ‘get out of trouble’ capability; the timetable works at 330 kph max, so that trains in front of the late one can actually speed up to create a gap for it. Most of all, the key risk on a mixed-use line arises when a fast train gets stuck behind a stopping or slow train. But that just won’t happen on HS2, as all trains are running at the same speed, and on the core route are all calling at Old Oak Common.

You don’t need ‘extensive modelling’ to see that running on 10 platforms with the same robustness as 11 means cutting the service. Plausibly, 16 trains per hour instead of 18 would do it, by freeing one of the 10 platforms for ‘events’. But if that’s the outcome, please take the train service specification given in the April 2020 business case and point at the trains – Stoke? Liverpool? Sheffield? Newcastle that you don’t want to run. Then go and tell the local representatives. I’ll hold your coat.

How else could you run the 18 tph on 10 platforms:

Shorter turnrounds so as to use less than 10 platforms in the plan? All that means is that trains turning up less than 10 minutes late, which will happen far more often, become a problem as well. So the shorter the turnrounds, the more contingency platforms you will need, and more trains will be departing off-pattern in throat, which isn’t pain free;

Run trains on time? Well yes. So why aren’t you doing it now? And it’ll cost you, as part of the solution would be infrastructure, such as on critical mixed use sections like Crewe – Carlisle – Scotland and York – Newcastle. Even to make termination at Old Oak no more frequent than daily, PPM would need to be 99%;

Make it 18 tph peak but less off-peak? Maybe. But you still need to tell someone they aren’t getting their off-peak service, whilst the risk persists in the peaks. And there’s almost no scope for keeping up the number of destinations by combining trains – look at that specification and ask which services you could combine. The only one I would suggest as even passingly realistic is to drop the fast Newcastles between the peaks, and extend the Leeds/York portions of the two Sheffield trains to Newcastle instead. But that’ll give you a radically different pattern on the conventional network which will probably come with an infrastructure cost, as well as a slower off-peak service. Besides, what, post-Covid, are the peak and off-peak anyway?

Technology? I was very interested in Roger Ford’s description of the Luminate TMS at Liverpool Street, re-planning trains away from a platform with defective OHLE. But it has to have somewhere to re-plan trains to, which without the 11th platform it hasn’t, and can no more do the impossible than a human can.

But I do not accept that loss of the 11th platform is necessary. The total of 26 platforms as now proposed is in fact more than the 24 offered by the hybrid Bill scheme. What is wrong is the split of those platforms between the conventional railway and HS2, bearing in mind that however integrated the stations are in terms of passenger facilities, the two railways at Euston are operationally as separate as are the Victoria and Northern lines. Rebuilding the station in one stage, instead of the two envisaged in the hybrid Bill, means that the conventional service needs 16 platforms up to completion when trains can transfer to HS2, but, despite then having no further need for 16 platforms, the 16 : 10 split becomes the end state.

The challenge, then, is to enable a different split, ideally 15 : 11, before completion (and I am conscious that this implies two side platforms which takes more space than one island). No doubt just reducing the over-site development would throw up space for, say 16 : 11, but construction periods, however nasty, finish, whilst the end state is for ever. First, I would ask whether the coincidence of the Covid effect is not in fact an opportunity for a slightly reduced service on the WCML, sufficient to operate on fewer than 16 platforms, until completion of the rebuild.

Then, although terminating HS2 trains at Old Oak is operationally messy and commercially neutral at best compared with the existing conventional service, the ‘one of these and one of those’ approach tabled by the DfT in the April 2020 Business Case is the worst of all worlds. Selecting a complete service group to be converted to HS2 despite terminating at Old Oak would at least enable passengers to plan around the London stations on offer, and permit full operation of all other service groups on the reduced conventional platforms.

Those are only my suggestions. Others may well have better ones. But the proponents of the 10-platform scheme must accept the challenge of finding them, as the end state inherent in the single-stage 10-platform scheme - for Network Rail, for HS2, and thus for the new Great British Railways - is wrong.

If you have something you would like to say about transport or engineering planning why not get in touch? Guest articles are more than welcome, e-mail; Info@EngineeringFocus.co.uk