On the 18th of November 2021 the Government published its long-awaited Integrated Rail Plan (IRP) that sets out how it will attempt to improve rail links across the North and Midlands. In this blog I hope to set out the main points from and unpick some of the claims made within the report.

This first part looks at the HS2 East announcement and the possible implications of cancelling the eastern branch of HS2. Part two looks into the detail of the Northern Powerhouse Rail proposal.

A link to the full report can be found here. 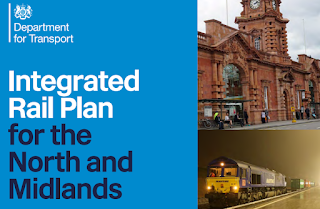 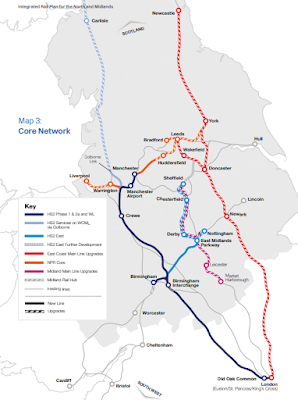 First of all, HS2 East is being cancelled, this hasn't come as much of a surprise to many within the rail industry, but it is still incredibly disappointing nether the less. The Government says instead it will upgrade the Midland Main Line and East Coast Main Line, which it claims will provide the same level of benefits as HS2 East.

The Govermnet says it intends to upgrade junctions, signalling and power systems on the ECML to enable trains to travel at 140mph on certain sections, as opposed to the 125mph maximum today. This increase in speed the Government claims will reduce the journey time from York to London by 15 minutes. It should be pointed out that with HS2 East the journey time from York to London would have been reduced by 26 minutes!

Journey times with HS2 East are shown below, I thought it was worth documenting before the journey time checker is removed from the HS2 Ltd website.

Interestingly the IRP shows a Newcastle to London non-stop journey with a time of 145 minutes, this is still a lot slower than would have been achieved with HS2 East, the journey on HS2 would have taken 137 minutes. But crucially not only would the journey time be slower, but introducing more non-stop trains on to the ECML will reduced capacity and connectivity further down the line, this is the exact thing that HS2 was designed to eliminate!

The whole point of HS2 is to remove fast services to the south which make few stops from the WCML, MML and ECML, freeing up existing lines for improved local and regional services. This simply will not be possible with the IRP proposal.

Instead of building HS2 all the way to Leeds with a new East Midlands Hub station at Toton, that would have served Nottingham and Derby, the Government instead says it will finally electrify the Midlands Mainline, something which the DfT promised in 2012 when they released details of the CP5 HLOS, but was later cancelled by the Government when the upgrade plans for 2014 to 2019 began to collapse.

With electrification to Sheffield and the short section of HS2 East, the Government claims the journey time from Sheffield to London under the new proposal will be exactly the same as would have been achieved with HS2 East.

The fact is the East Midlands needed HS2 East and electrification of the MML, not either-or. There was certainly a strategic case for both.

With HS2 East in effect cancelled there doesn't seem much hope of the transformational capacity and regional connectivity enhancements that would have been achieved with the completion HS2 East. The very short section of HS2 to East Midlands Parkway will do nothing to improve capacity and connectivity around the East Midlands as the fast trains which currently travel to London via the MML will still be using the MML, albeit only to East Midland Parkway. The cancellation of HS2 East also means that East Midlands Hub will no longer be constructed and as such the planned improvements to local rail services to allow passengers from Nottingham and Debry to access HS2 services will no longer go ahead, or at least will not be as ambitious as those planned to support the East Midlands Hub proposal.

The Cancellation of HS2 East will not only have an impact on the Midland Main Line, but it will also impact East Coast Main Line services. The Government claim that "an upgraded ECML will deliver journey times from London to York and North East England similar to the proposed HS2 scheme", but this to me just seems like a lie. Their very own figures published within the report and shown above, show that journey times from Leeds, York, Newcastle, Darlington and others will be in some cases significantly worse than would have achieved with HS2 East.

There will also be no new Leeds station, therefore there will be no additional capacity, so, many of the fast intercity trains to London will continue to start/terminate in the main station taking up valuable platform space which could have otherwise been used for improved local and regional links. The Government states that it will instead upgrade the existing station, however, it's difficult to see quite how this will be achieved without disruption to existing services for years.

The Government does state that "we will look at the most effective way to run HS2 trains to Leeds", but again doesn't go into any specifics and it's difficult to see how Leeds to Birmingham services could be timetabled without eating into capacity on the MML. Also, the IRP journey time of 89 minutes is woeful compared to the 49 minute journey that could have been achieved had HS2 East been built in full. The 49 minute Leeds to Birmingham journey with HS2 would not have used any capacity on the MML, unlike the IPR proposal, which will have to use part of the MML to get from Leeds to East Midlands Parkway.

The only faint glimmer of hope is that the Government is to retain safeguards on the original route, the IRP document states "the Government does not intend to lift safeguarding on the previously proposed HS2 route at this time".

As far as relieving congestion on the ECML goes, the IRP seems to do very little. Increasing speeds will not increase capacity, you just end up with same current mix of stopping and non-stopping services, which means there will be no scope for improved rail links along the ECML for places such a Newark and Retford.

I thought that I would have been able to go into more detail about specifics, but they're sadly lacking from this document. It reads more like a shopping list rather than an actual plan. Any proposals for upgrades will have to be looked at on an individual basis. So for example each junction that will need to be grade-separated on the ECML will require its own business case, which will have to be drawn up by Network Rail or by the time the Government gets around to implementing the IRP, I assume it will be the responsibility of Great British Railways?

It's possible that Network Rail or GBR could draw up a plan to upgrade a junction, only for the Treasury to turn around and say it the Government can't afford it at this time or the business case isn't strong enough. So there's the potential for each and every proposal to be slowly but surely rejected, thereby slowly eroding the proposals set out in the IRP.