This is article was originally published in Rail Magazine in 2019.

In 2012 the Department for Transport published its high-level output specification (HLOS) for control period 5 (CP5), covering the period from April 2014 to March 2019. The 5 year, £38bn plan promised to deliver 1,360 route km of electrification by 2019, and to transform rail travel across the length and breadth of the country. 4 months prior to the start of CP5 Rail magazine published a map created by Engineering Focus, which highlighted many of the schemes which were promised to be completed by 2019. Now that CP5 has come to an end and CP6 has begun, it is a good time to see what has been achieved, which schemes were postponed, which were cancelled and which schemes are behind schedule.

As work got underway at the start of 2014 passengers were reassured that any disruption between 2014 and 2019 would pay off, as new services, new trains and quicker journeys would be delivered once the work had been completed. Unfortunately only 1 year into CP5 it was clear that electrification of the GWML between London Paddington, Bristol, Cardiff and Swansea was not going to plan. By the summer of 2015 the original budget of £800m had more than tripled to £2.8bn, therefore in a bid to keep costs under control and to keep electrification of the GWML on track, the government announced that a number of electrification schemes would be "paused".

Initially, it was announced that Midland Main Line (MML) and Transpennine electrification would be paused, whilst electrification of a number of GWML routes would be deferred. The routes deferred included Didcot Parkway to Oxford, Bristol Parkway to Bristol Temple Meads, and lines to Henley and Windsor. The electric spine which promised to provide an electrified route for freight services from Southampton to the Midlands and across to the MML was also paused.

Funding for the electrification of the East-West route between Oxford and Bedford was withdrawn and electrification between Reading and Oxford was deferred. It is now unclear if any part of the proposed electric spine will be delivered. Conversion of the line between Basingstoke and Southampton from 3rd rail to overhead is also now off the table, so any hopes that freight operators had of an electrified link between Southampton and the North have been dashed.

It is now hoped that electrification between Bristol Parkway and Cardiff will be completed by January 2020, over a year behind schedule. Whilst passengers have benefited from the introduction of new class 800 bi-mode units which began to enter service in late 2017, those travelling from South Wales have yet to feel the full benefits of electrification, such as the promised reduction of the Cardiff to London journey time of 15 minutes. 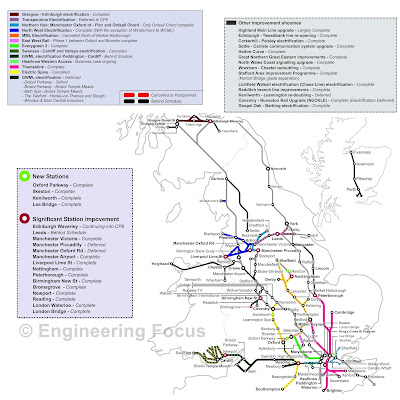 The original article was accompanied by a map which showed which projects were completed, delayed or cancelled. Correct as of spring/summer 2019. A full-size PDF can also be viewed here

The North West electrification programme (NWEP) also suffered a number of setbacks. Whilst Transpennine Express did begin to operate electric services between Manchester Airport and Scotland via Chat Moss/WCML from December 2013, electric services between Liverpool Lime St and Manchester Airport did not begin until March 2015, 3 months behind schedule. The 3 month delay although relatively modest, was a sign of further delays to come. As the NWEP progressed the timescale for the opening of subsequent phases began to slip. Poor ground conditions, known and unknown mine workings were blamed for the delays, which in August 2015 led to Balfour Beatty pulling out of the project after completing only 2 out of 7 phases. The route from Manchester to Preston via Bolton was originally scheduled to be complete by December 2016, however delays meant that class 319s did not begin to operate on the line until February 2019. 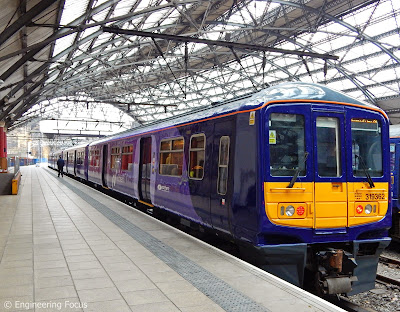 319 362 stands at Liverpool Lime St before setting off for one of the first electric services between Liverpool and Manchester in March 2015.

A report by the Nation Audit Office published in November 2016 found that there were major failings by Network Rail which lead to the cost of electrification of the GWML between Maidenhead and Cardiff to rise to £2.8 billion. The NAO stated that Network Rail “was too optimistic about the productivity of new technology”, and that “It [NR] underestimated how many bridges it would need to rebuild or modify”. The report also highlighted the fact that NR failed to manage the challenges of using new electrification equipment, which had not been tried or tested previously anywhere in the world.

The NAO report acknowledged that electrification of the GWML was complex and the fact that the railway passed through heritage areas and areas of outstanding natural beauty, which provided additional challenges. The report also attributed some of the blame to the DfT, which it said: “did not produce a business case bringing together all the elements of what became the Great Western Route Modernisation industry programme until March 2015”. This was more than 2 years after placing the order for new trains and over a year after Network Rail began work to electrify the route.

It wasn't only electrification schemes that faced cutbacks and delays, with the full Northern Hub programme yet to be realised and uncertainly remains over when or if key elements will be delivered. A crucial element of the Northern Hub project was to unblock the bottleneck between Manchester Piccadilly and Oxford Rd, this was to be achieved with the construction 2 new through platforms at Piccadilly and widening of the viaduct between Oxford Rd and Piccadilly, in addition, Oxford Rd station was to be substantially remodelled. Yet to date no work has taken place and there are questions over whether or not the proposal will ever commence.

The £85m Ordsall Chord which formed part of the Northern Hub project was complete in 2017, allowing trains to travel between Manchester Victoria and Manchester Piccadilly for the first time, and a number of smaller schemes have been completed or are underway across the Pennines, which seek to improve reliability and reduce East-West journey times.

It's impossible to talk about CP5 without mentioning Crossrail, although no strictly part of the CP5 HLOS, it was expected that trains would begin operating from Heathrow and Reading through central London to Shenfield and Abbey Wood by the end of 2018. However, just months before services were expected to begin it was announced that the opening date would be pushed back to autumn 2019. Now it is thought the section through central London will not be fully completed until 2020 or possibly 2021. The budget for the project has risen by £3bn, with the cost rising from £14.8bn to £17.6bn. 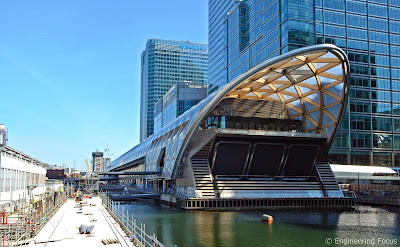 The newly constructed Crossrail station at Canary Wharf pictured in 2015

It's not all doom and gloom however, the North West electrification programme was largely completed during CP5, with the exception of the line between the WCML and Windermere. Despite the delays, services across the North West have been transformed and now finally new trains are beginning to enter service.

In Scotland the Edinburgh Glasgow Improvement Programme (EGIP) saw the electrification of 150 route kilometres of railway between Cumbernauld and Newbridge Junction which allowed new class 385 EMUs to enter service between the 2 cities. Electric services between Edinburgh Waverley and Glasgow Queen Street via Falkirk High commenced in 2017, initially operated by class 365s and class 380s up until summer 2018, when class 385s built by Hitachi at Newton Aycliffe were finally signed off for passenger use.

Although improved East-West connections across London are delayed for now, North-South connectivity has been transformed, thanks to the £7bn Thameslink programme which had been underway since 2009 and was complete towards the end of CP5, allowing trains to operate from Bedford and Cambridge through the capital to Brighton and Gatwick Airport.

I think to say that CP5 didn't go to plan is somewhat of an understatement, however, whilst the updated version of the map does highlight those schemes which have been delayed or cancelled, it should also serve to highlight some of the great achievements accomplished during the 5 years between 2014 and 2019. And many passengers are starting to see the benefits, now that a large number of new trains are finally beginning to enter service.