It would seem that the title of the blog should have been "the time for discussion should be over" as it appears the leg from Birmingham to Leeds is going to be heavily curtailed. I'll wait and see what detail emerge this week, but it seems almost certain that the government is going to be making a huge mistake. Not only will de-scoping HS2 East reduce the journey time benefits from Leeds to London and Birmingham, and mean there will be little to no increase in capacity,  but it will also mean that there will be no hope of improved regional journeys that would have been made possible by the construction of the eastern leg of HS2.

In 2009 when I first began actively campaigning in support of HS2 I never imagined I'd one day be photographing and writing about the construction of the project. At the time I was in my mid-20s and full of youthful optimism and felt that someone ought to be challenging the many myths about the project which were being disseminated by opponents of the project. At the time HS2 Ltd had no social media presence and no one working for the DfT felt it was the job of HS2 Ltd or indeed Government to promote the project. HS2 Ltd's job was solely seen as designing the line and ensuring the required bills made their way through parliament.

In the end HS2 took 10 years to get from the initial planning phase to construction, but finally in June this year (2021) I captured my first images of the progress so far. Admittedly I'm a little late to the party, as construction has been underway for quite some time, in fact, the first TBMs christened Florence and Cecilia launched to dig the two 10 mile long tunnels underneath the Chiltern hills have already excavated 2 miles of tunnels between them. However the pandemic and living up North made it difficult to justify a trip south just to see what's been going on. So, during my visit to the Midlands for Rail Live 2021 I thought I'd have an extended stay so I could see for myself some of the progress that has been made so far on the construction of HS2.

The first stop was the site of what will eventually be the HS2 Interchange station located close to Birmingham Airport. This station will be connected to Birmingham International railway station and Birmingham Airport using an automated people mover, which will be able to transport people from the station to the airport in just 6 minutes. Birmingham Interchange will also allow people from Solihull and the surrounding area to access HS2 services to London, Birmingham city centre and the North. The station itself will be comprised of 2 platforms, with 4 platform faces and a pair of through tracks for non-stopping services from the North to London.

A significant amount of work has already taken place around what will be the new station, with a key road bridge over the M42 having already been constructed. The 65-metre bridge which now spans the M42 was moved into place by SPMTs (Self-Propelled Modular Transporters) over the space of just 2 days. A new road bridge has also been installed over A446/A452 which will link the A452 to a new link road and roundabout to Birmingham Interchange and NEC, a video of which can be seen here 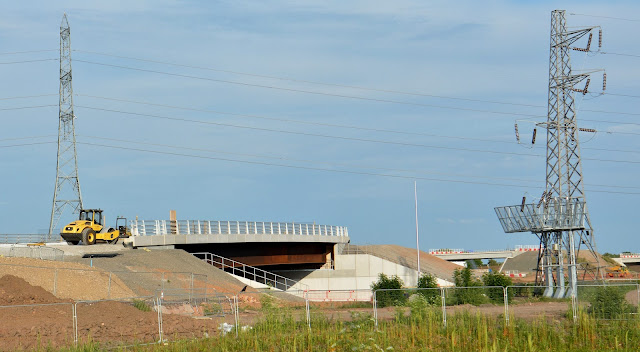 New roundabout layout, which will connect the A452 to the B4438 and NEC

Groundworks appeared to have started on the site of the new 400m long station, however, the tender to build the station itself isn't due to be awarded until next year, so it's unlikely that any significant progress towards construction will begin before the end of 2022.

The next day I took a trip into Birmingham to check out the site of another new station, this time located in the heart of the city. Curzon Street station is being constructed alongside the WCML and will have an entrance next to Moor Street station, and despite claims to the contrary made by opponents of HS2 will be only a few minutes by foot from Birmingham New Street station.

A video taken onboard a WMR service into Birmingham New Street station showing progress as of June 2021 can be found here.

Curzon Street station will be a 400m long station with 7 platforms, the main entrance of which will open out onto Moor Street Queensway providing access to Birmingham Moor St station, with a short walk through St Martin's Queensway to New Street station. There will also be a second entrance roughly in the middle of the station which will utilise the original building which formed the entrance to the former station which was the terminus of the London and Birmingham Railway and the Grand Junction Railway. The original station opened in 1838, but was closed to passengers in 1893, the station itself was later demolished but the Roman-inspired Grade I listed building survived. It is this building that has been incorporated into the design of Curzon Street station. The building which will form an entrance leading out onto Curzon Street is currently undergoing refurbishment. Once completed the building will include "a new steel structural frame to strengthen the building, a new lift giving access to all four levels, new glass balustrade for the historic staircase, internal fit-out, roof repairs, structural repairs to the external façade, and a full clean of the external building masonry." source HS2 Ltd 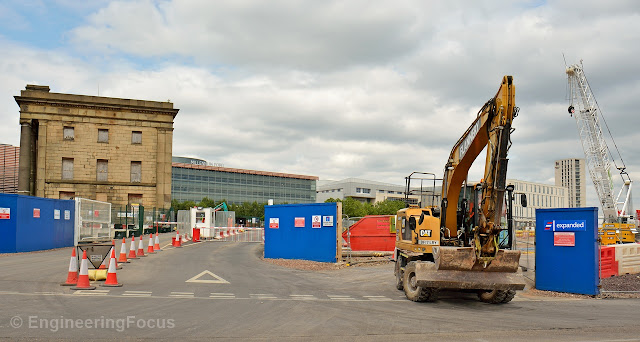 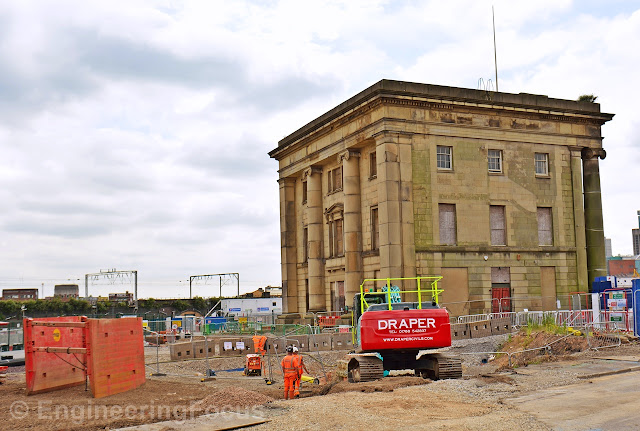 There will be 3 departures from Curzon St to London each hour, taking just 45 minutes to reach the capital, stopping at Interchange and Old Oak Common. There will also be services to Manchester once HS2 phase 2b is complete, with the journey taking just 41 minutes, slashing the Birmingham to Manchester journey time in half. There are currently plans to operate services to Leeds once phase 2 East is completely, but there are currently questions over whether this phase will be built in full or not. If the section of HS2 to Leeds is built in full then the journey time from Birmingham to Leeds would be 49 minutes, cutting the journey time in half, down from 2 hours currently. 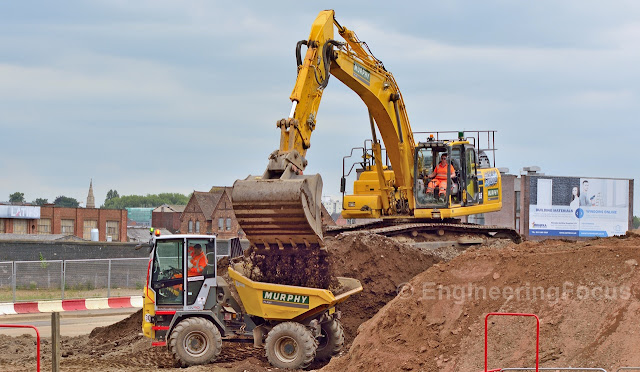 Although there wasn't a great deal of construction to see during my visit to the West Midlands it was certainly good to see that some progress is finally being made after 10 years of discussion. Looking back at my 5 years of campaigning activity from 2009 I'm not sure what, if any impact I made, but I felt strongly at the time that someone should be challenging the myths from HS2 opponents. It's frustrating to see that although over 10 years have passed, some of the old tropes such it only saving 15 minutes are still being circulated, but despite the best efforts of a well funded and vociferous anti-HS2 campaign the line is being built and there's very little the current cohort of opponents can do but add to the cost, through the need for extra security and legal fees to force the removal of protesters.

For me, my brief foray into campaigning inspired a love of the railways which has stayed with me and has inspired me to continue campaigning, but now on more of a local level, which has seen me campaigning for improved rail links on the Wrexham-Bidston line.